Radical communist “resisters” just can’t help but hate President Trump. Why? Because he doesn’t bow to their demands like a spineless wimp. He doesn’t believe that fringe groups should hold any power over American politics, so he doesn’t take them seriously. (Does anyone?)

Now they’re fighting back by taking to the streets to protest the “illegitimate” Trump/Pence “regime.” They claim they won’t stop until their demands are met.

Or until their moms threaten to change the lock on the basement doors. 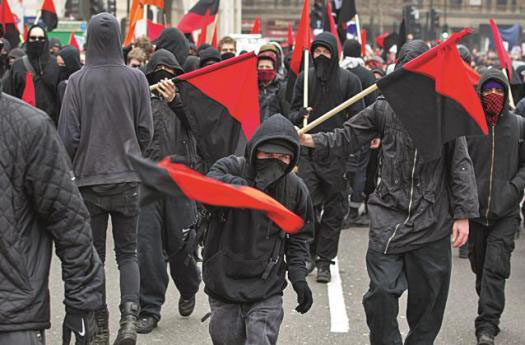 On November 4th, the communists will take to the streets to demand that their lawfully elected President be removed from the Oval Office because they don’t like what he has to say. No really. For people who pretend to be tough, they’re really just a bunch of tantrum-throwing children. I’m assuming they didn’t get spanked as children and that’s why they’re so socially dysfunctional.

Their website hosts their entire plan[2], including a list of “nightmares” that includes fearful immigrants (with no distinction between legal and illegal,) millions of people being “denied the right to live” and critical thinking destroyed (someone’s a little tardy to the party, but we’ll let that slide because it’s coming from a commie.)

They then list how they plan to fight back against the boogeymen they’ve created in their own minds, because as with all fearmongers, they have a solution in search of a problem.

We will gather in the streets and public squares of cities and towns across this country, at first many thousands declaring that this whole regime is illegitimate and that we will not stop until our single demand is met: This Nightmare Must End: the Trump/Pence Regime Must Go!

Our protest must grow day after day and night after night—thousands becoming hundreds of thousands, and then millions—determined to act to put a stop to the grave danger that the Trump/Pence Regime poses to the world by demanding that this whole regime be removed from power.

I wish I were kidding about this. These clowns actually think that their “persistence” is going to be noticed by the whole world, forcing the American government to give in to their demands. I would laugh if I wasn’t about to cry.

Now the question becomes: Do we mock or ignore these tools? Discuss.