I consider it a crime[1] to block a highway or street with a protest and the agitators should be carted off to jail. However, you don’t ‘intentionally’ run them down. That’s a crime as well. It’s called vehicular homicide. This video seems to take place in Brazil. A bunch of protesters with a black flag (which could be your pick: Antifa, communist, ISIS, anarchist, etc.) blocked a freeway there. Most people stopped for it and were super annoyed and angry. One person zoomed up and the protesters descended on the car, beating on it. The driver hesitated and then punched it, driving through and running over a couple of people. One did not get up and my bet is he never will.

This is on video and it is graphic, so there is a chance the police will track down that driver. That’s if they bother. Brazil is not like the US. Their police force can be brutal and they don’t like the protesters either. We are all fed up with these commies who shout “F**k the Police!” and “Shut This Sh*t Down!” They terrorize drivers and sometimes they drag them out of their cars and beat the hell out of them. Things are definitely out of control. And that definitely includes the US. The riots on commie May Day yesterday in Portland, Oregon prove that point. 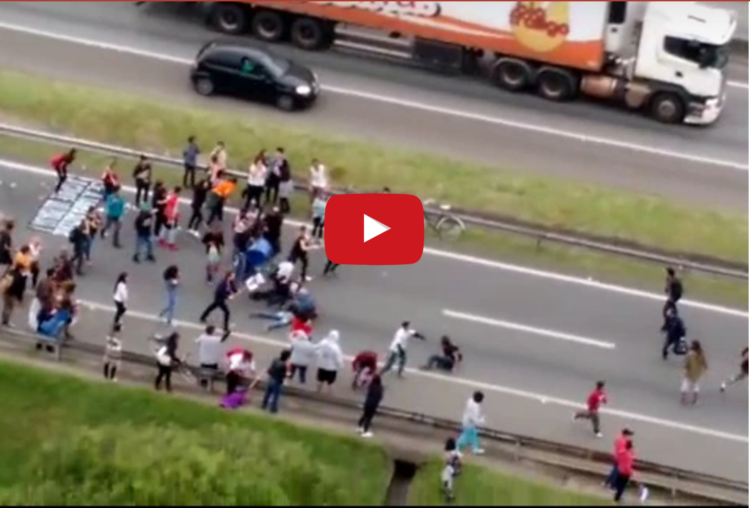 At some point, most Americans will crack.

The protests, the demonstrations, the riots. It all becomes too much.

Blocking the road, chanting “F**k the Police!” and “Shut This Sh*t Down!” It’s offensive, vulgar and accomplishes nothing.

You can see protesters in this undated and unknown video (posted by the Facebook group “Trump Supporters”) blocking a highway. It looks like a protest in Brazil. It’s unknown what they’re protesting, but one can take a good guess. You can see what looks like a black flag waving.

At some point, one frustrated driver approaches the crowd, who descends on the car, seeming to try to push it away.

The driver then backs up for a second and floors it … running over several protesters in the process. At least one of them lies motionless on the highway.

We may learn more about this video soon but one thing is for sure.

Things are getting out of control.

North Carolina along with other states are passing bills that protect drivers from prosecution if they inadvertently hit one of these morons during a confrontation on a roadway. But that doesn’t include the deliberate running over of these moonbats. At the very least it would get you vehicular manslaughter and probably murder. Something has to be done because these thugs are blocking first responders and ambulances from getting where they need to go. They are causing deaths as well.

The solution is to arrest them… give them a lengthy sentence and a heavy fine. Just keep them from doing this. And police should be allowed to use as much force as necessary to remove them as well. That’s what you do in a case like this. And if you are driving, make sure you are legally armed and packing. Because some of these Marxists will endanger your life on multiple levels. In John Hawkins’ new book, ‘101 Things All Young Adults Should Know’[3], he teaches in number 81 of the book, “If you buy a gun, learn to use it.” If you are armed, make sure you know how to use that gun… just in case.