ANTIFA Protester Tries To PUNK Man With “In God We Trust” On His T-Shirt, IMMEDIATELY Regrets It [VIDEO]

Obama’s America is taking a lot longer to disappear than hoped for. Many had hoped that once he was out of the White House, the rest of the trash would be taken out with him, however that is not the case. It appears it is going to take a lot longer to calm a nation of chaos, that has been left behind by him for us to clean up. 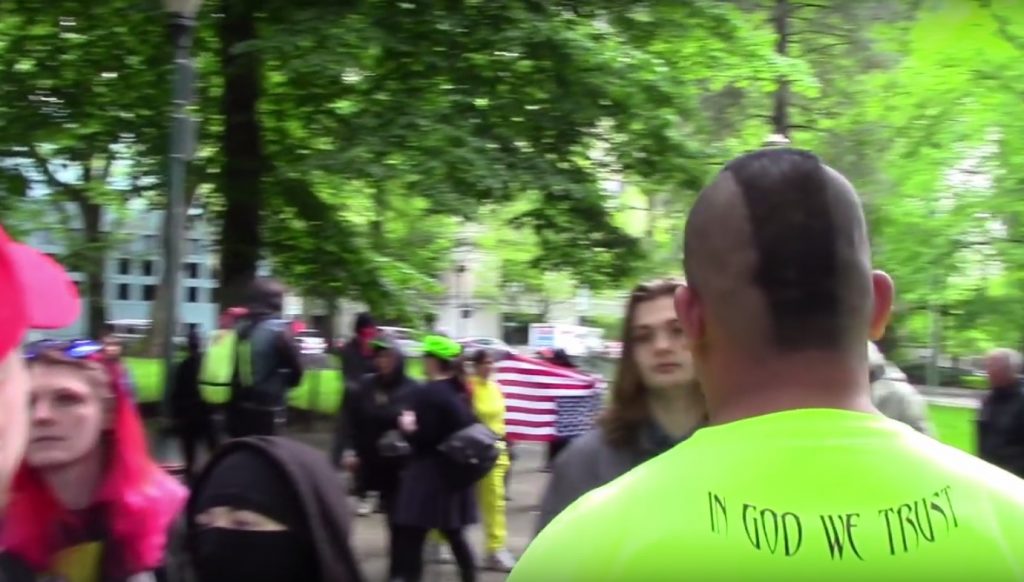 Antifa was prepared to take a stand for something again. In response to their plans, a group called “Patriot Prayer” organized a watch, in efforts to ‘watch’ over the Antifa protesters to make sure they didn’t break laws or block traffic as per their usual style. It’s been a huge problem for Portland since President Trump took office, and people there are fed up with the nonsense of it all.

So, Patriot Prayer put out a message on their Facebook page: “This is not a rally or a march. All are welcome to join but please do not come if you can not control your temper.” 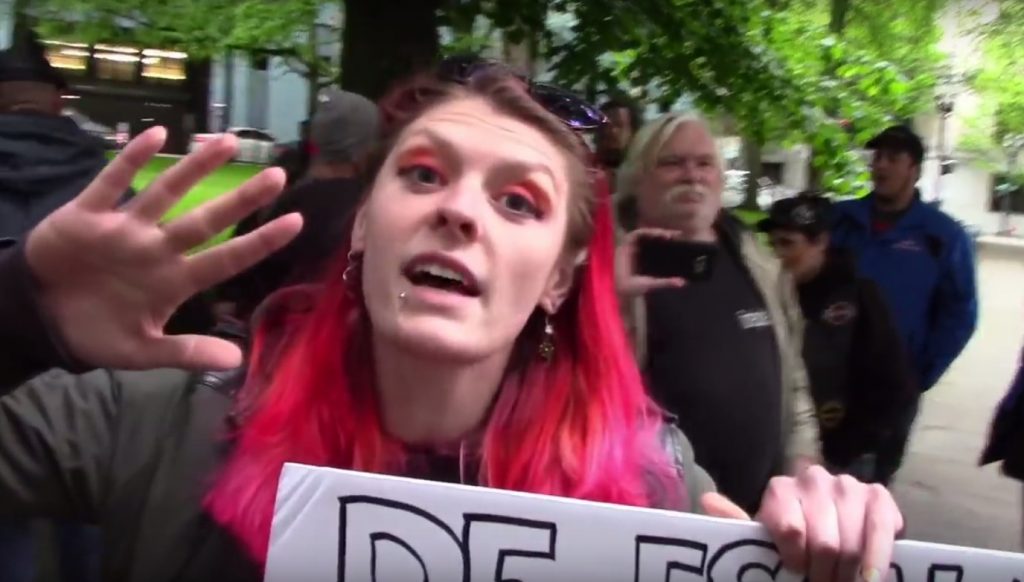 So, then came the day of the protest and both groups converged right there in Chapman Square. Immediately emotions ran high and while the video cameras rolled…the drama unfolded. You will see a woman wearing sunglasses who seems to be the leader of the Antifa group and she starts to accuse the Patriot Prayer members of invading their space.

That was all it took…

Up to that point, it was only a war o words and for a moment it seemed that it would only be that. However, that changed real quick when a big fellow with a mohawk, wearing a t-shirt that said “In God We Trust” on the back tried to walk past the Antifas. They weren’t having it, that is where they made their biggest mistake. 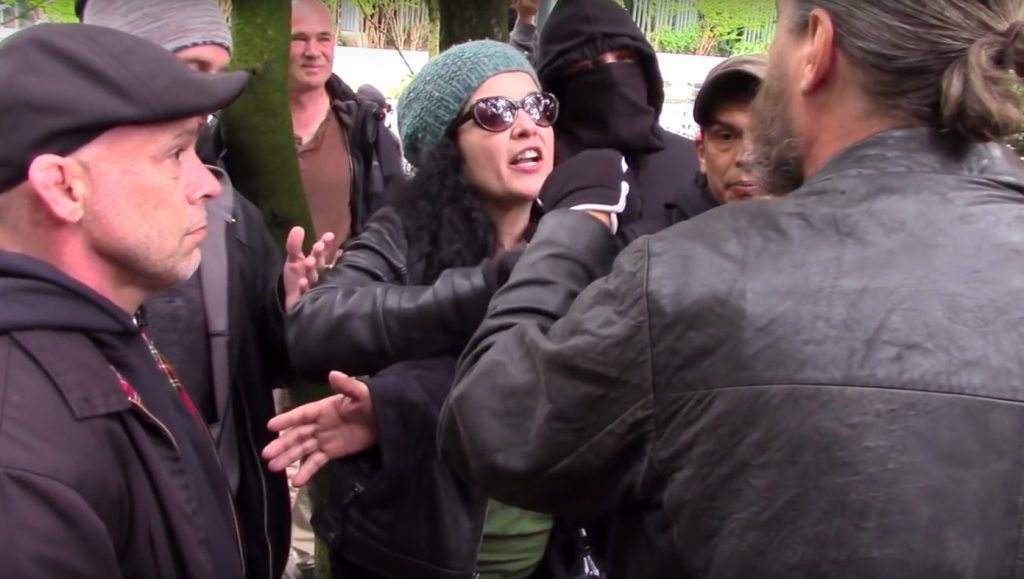 That was when the war of words…ended and violence took over. 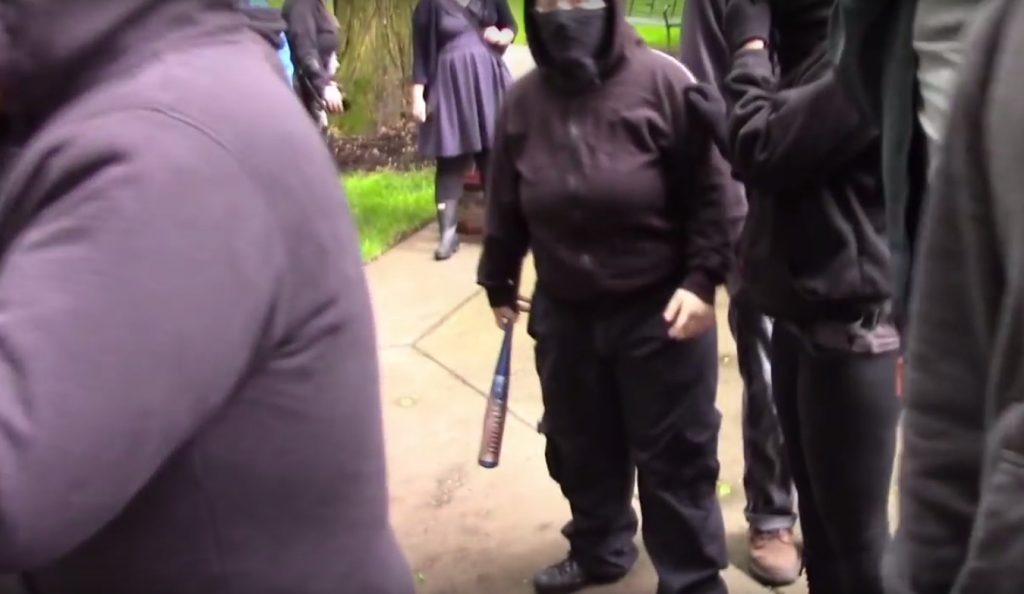 Suddenly a far less imposing long-haired guy, apparently in ranks with the Antifas, figured it would be a good idea to try blocking the big guy’s path.

His path momentarily thwarted, the big guy paused for a moment and then socked the long-haired dude with a quick left — and down he went.

“Don’t f***in’ touch me!,” the big guy yelled, pointing at his fallen opponent.

That set off the Antifa faithful, who began screaming at the Patriot Prayer members and putting up their hands as if ready for combat.

And as it happens, one of them apparently was prepared for such a moment — a masked, black-clad woman carrying a baseball bat.

But the Antifas began to retreat when a Patriot Prayer member got on the phone with police and described the woman carrying the bat, later adding she had a knife.

An Antifa woman with bright pink hair tried telling the man talking with cops that, “We’re trying to deescalate.”

Another guy, apparently an Antifa supporter, told the Patriot Prayer group to “just back off. Y’all don’t need this nonsense” and added they took the baseball bat “out of play.”

Pray for our nation, for her president and her people. This cannot be fixed by man, we need divine help….it is the only way to calm an entire nation in uproar.