In a disgusting act of twisted perversion, a 29-year-old baby-sitter of an 11-month-old baby not only *allegedly* sexually abused the child, but took photos and texted them to her co-pedophile boyfriend. The despicable story doesn’t end there, either. They had plans for another little one that were just as heinous. More from Daily Headlines[1]: 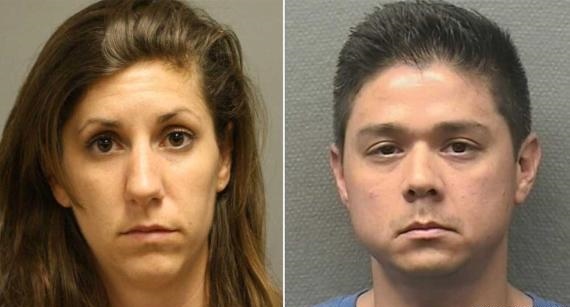 What a sick sad world we live in. When are we gonna have stronger punishments and more awareness for the real evil and that is pedophilia

Ashley Dack, 29, of Texas, was babysitting young children when she sexually abused the 11-month-old baby and took photos of the acts.

According to court documents, Dack sent the photos via text message to her boyfriend, 37-year-old Patrick Schuneman.

Schuneman allegedly replied: “incredible” and “best ever seen. Thank you.”

Investigators said that they found graphic photos and text messages, including an extremely worrying exchange that revealed how the pair was planning to kidnap and sexually torture a young girl in Dack’s car.

Dack allegedly sent a message to Schuneman saying: “There is a little girl at lunch with blonde hair. She kept dancing around on the floor. I want you to be hiding in my car and I will bring her to you. She is maybe 4 years old.”

Schuneman allegedly replied: “I would love that, would you join us or leave us alone?”

Dack allegedly replied “join you, we can use the seat belt to hold her down.”

Prosecutor Tiffany Dupree said that the defendants befriended women who have young children, to gain access to the victims.

The couple was charged with sexual performance by a child and super aggravated sexual assault of a child. They are held at $350,000 bail.

Why is there bail at ALL for these twisted freaks? There’s a special place in hell just waiting for people like you two. These sort of sick, nasty deeds do not go unnoticed in the after life. Enjoy your self-made BBQ, you horrid people.