What an idiot. I hope the book is thrown at him for for trying to terrorize those poor people.[1] 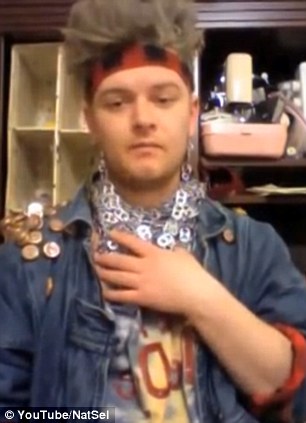 A ‘performance artist’ was arrested after planting a suspicious bag at the finish line of the Boston Marathon on the one-year anniversary of the bombings.

While police have yet to confirm the identity of the suspect, CBS Boston has named the man as 25-year-old fashion designer Kayvon Edson.

After being arrested, Edson told police the bag contained just a rice cooker filled with confetti but a bomb team was brought in anyway to detonate it ‘for precautionary reasons’. Another suspicious bag was blown up as well, but that one was mistakenly left behind by a news crew. The entire area was closed off to pedestrians for hours, and part of the green line on the light rail was shut down.

Friends on Edson’s Facebook page are speculating that the incident was all part of performance art gone wrong. He has since been charged with disorderly conduct, disturbing the peace, and possession of a hoax device.

…Earlier Tuesday, Edson changed his Facebook cover image to a picture of Boston Marathon bombings suspect Dzokhar Tsarnaev which read: ‘Had a blast at the marathon!!!’ Edson tagged the image with ‘Tamerlan Tsarnaev and Dzokhar Tsarnaev is innocent’.

After Edson’s name was released, people started commenting on the image, with one person calling it a ‘pathetic attempt at “performance art.”‘

Wow, won’t it be wonderful to see what kind of “performance art” he can perform in a jail cell?