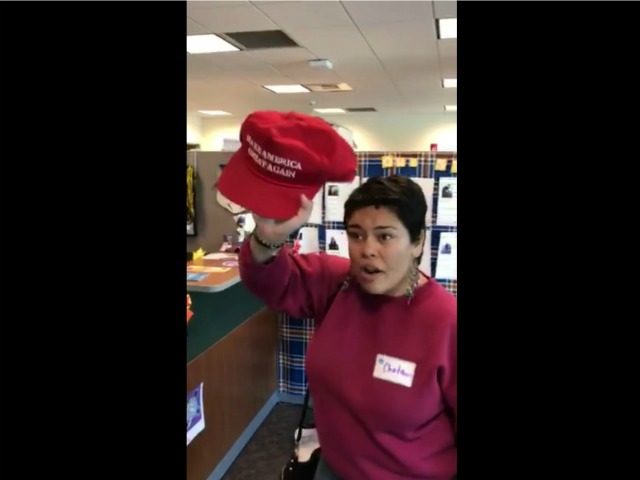 Student wears MAGA hat. Another student steals it. That student is now facing up to a year in jail.

After a video emerged showing what took place between the two students at UC Riverside, the young woman, identified as Edith Macias, has apparently now been charged for the theft of the MAGA hat which took place back in September. The video was filmed by student Matthew Vitale, who was the owner of the hat. After yanking the hat from the head of Vitale, he turned on his phone’s camera and started filming Macias as she marched on to the office for campus student life to complain that he was allowed to wear such a thing:

“[This college] is letting people wear this s**t on campus? Make America Great Again, really? There were lynchings and genocide and mass deportations… I f**king hate this country. And I am not leaving. We need to get rid of all y’all.”

She went on to rail against “freedom of speech,” calling the other student “boy,” saying that “freedom of speech is literally killing a lot of people…” at which point any person should stop and laugh. Yeah, the First Amendment is the number one killer in America today.

We now know that Macias’ court date is set for March of 2018 and she has been charged with one count of misdemeanor grand theft. The charge could bring up to one year in jail. Matthew Vitale, meanwhile, said that the charge should be a message to other colleges about what kind of behavior is acceptable in the eyes of the law.

So far, the only interaction I’ve had after wearing my MAGA hat in public was an older guy giving me an “okay” hand sign and said “I love your hat!,” when his wife gave him a pull on his arm and a scowl. I was so deep into hipster craft beer bar territory that I think everyone thought I was wearing it for jokes, so I didn’t have any trouble. Bless the fact that hipsters interpret everything as ironic. Earlier today we posted a video from filmmaker Ami Horowitz who showed the difference in response he got from another California campus when he waved an American flag versus an ISIS flag[2].

The video showing the incident of the stolen MAGA hat is almost ten minutes long and was shot on a cell phone camera. Comments on the video range from saying that the hat-yanker has the face of a four year-old who is “about to throw a tantrum,” along with some cries of “Lock her up!” You can watch it here:

A few weeks ago we wrote about YouTuber Blaire White who was assaulted for wearing a MAGA hat in Hollywood[3], with a “fat feminist” wearing one of those stupid pink hats who then yanked it off of her head and stomped her hands when she tried to retrieve it from the ground.