Black Man Who FAKED Hate Crime Will NOT Be Charged

I’ve getting tired of seeing news about “hate crimes” because more often than not, the person filing the complaint actually had a hand in doing it themselves just so they can make someone else look bad. It’s a sad truth, but it’s also making it extremely difficult to take legitimate filings of hate crimes seriously. It’s “the boy who cried wolf” all over again.

A black man recently reported that his vehicle had been covered in “racist graffiti” including the “n” word and the phrase “whites only.” It turns out he wrote those things himself. Classy, huh? 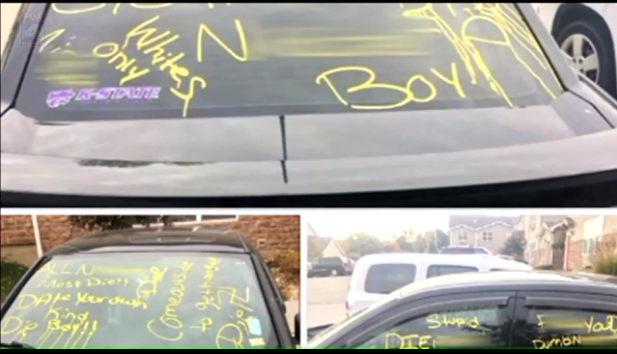 Dauntarius Williams, the 21 year-old owner of the vehicle admitted that this was done by his own hand for a Halloween prank that got out of control.

In response to the “prank,” which at the time was considered legitimate, the Black Student Union held an emergency meeting that drew out activists and concerned students. The college, Kansas State, held a Facebook Live event for parents who might be worried about the safety of their student on a campus where such a thing might happen and the FBI even opened an investigation into the potential “hate crime.” As a result, campus patrols were also stepped up.

But Monday revealed a press release sent out by Riley County Police Department that stated Williams himself was responsible for creating the graffiti on his own vehicle.

They concluded it by saying that he will not be charged with filing a false hate crime report because they don’t believe it would “be in the best interests of the citizens” of Manhattan. Unfortunate, because action should be taken against those who attempt to  incite racial hatred or fuel the flames of racial tension in our country, especially at a time where any spark could set off the powder keg in which we currently live.

This was absolutely stupid and certainly ill-timed on his part. I don’t understand the “prank” side of it either, because pranks are usually funny, but I’m going to chalk this up to drunk college kids being drunk college kids. The fact that this was a waste of resources from both the FBI as well as the school is what really concerns me. While the police may not pursue charges against him, will the school? Will he be suspended as a result? I doubt it, but an example should be set for someone who falsely reports a crime.