Body camera captures officer pleading for man who’d just shot him to put down the gun… Then it happened. (VIDEO)

Do you remember the Theodore Johnson case in Cleveland? It was something of a cause celebre for the #BlackLivesMatter movement after Johnson was shot by Cleveland police in his home in March, although Johnson had a record of mental illness and brushes with the law. When the Cleveland Police Department did not initially release the body-camera footage of the shooting, that fueled the #BlackLivesMatter narrative until a mountain of facts indicated Johnson was less of an attractive mascot than even Michael Brown or Eric Garner were.

This week, the body-camera footage of Johnson’s shooting was released and the case is most certainly closed[1]… 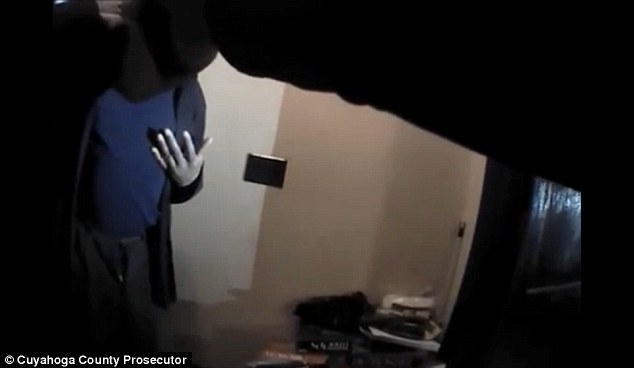 A dramatic and disturbing video recorded by a police body camera shows Cleveland patrol officers, including one whose ballistic vest had been struck by gunfire, trying to convince a man to drop his gun before four other officers shot him to death.

One of the videos released Wednesday shows Theodore Johnson shooting at the officers. One of the rounds struck the chest area of Patrolman David Muniz’s ballistic vest.

Another video, recorded by Muniz’s body camera, shows a despondent Johnson telling officers that he wants to die.

‘I know you just shot me, but I’m not going to shoot you,’ Muniz tells Johnson.

Johnson says he doesn’t care. ‘Do what you do, man.’

The video was released by Cuyahoga County Prosecutor Tim McGinty the day after he announced that a grand jury had determined that the four officers were justified in using lethal force against Johnson on March 11.

Police went to Johnson’s home that night after his wife went to a police station and told officers that Johnson had threatened to kill her and their landlady.

The body camera video makes clear this was not a case of police brutality, but more of a suicide-by-cop scenario…

Have you noticed that in the vast majority of these police-abuse cases that the more information comes out the more reasonable the police appear? That certainly seems to be true in the sad case of Theodore Johnson.