This works in shows like Supernatural, but I don’t know that it’s as socially acceptable in the real world.

Russian man and taker of terrible advice, Yuriy Golvin, 30, has been detained for allegedly digging up the grave of 17 year-old Olga Gileva. Because a sorceress told him to.

Because he believed she was haunting him.

Vodka is a hell of a drink. 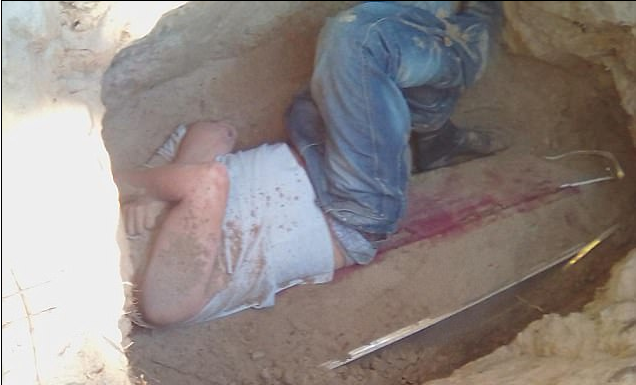 Gileva passed away 5 years ago, but Golovin believed that his former lover had been haunting him since her death. He was allegedly taking advice from a sorceress who told him that he needed to destroy the body in order to dispel her spirit from his life.

The above picture appears to show either the man himself or an accomplice lying on the coffin of the teen girl after the grave was dug up.

Police have also arrested a 23 year-old man in connection with the incident and launched a criminal investigation that may result in multiple 5-year sentences.

This scene was spotted by a friend of the deceased, Oleg Ivanov, who visited the cemetery. Can you imagine visiting a loved one’s grave and seeing that it had been dug up? That would be absolutely horrifying and disrespectful on a level that very few people are unfortunate enough to experience.

So, exactly how was this young girl haunting Gileva? Well, he was seeing her in his dreams and didn’t want to. Now I’m not a psychologist or a sorceress, so don’t take my word for this, but it seems to me that seeing a dead person in your dreams is not them “haunting” you, it’s your brain remembering them. The death of someone close to you is a traumatic event and everyone deals with it differently. Apparently he didn’t want to deal with the way that his brain was handling it.

Let’s hope he gets the book thrown at him for this.