A brutal nightclub shooting[1] has occurred in Cincinnati. At about 1:30 am this morning, several gunmen opened up fire in a nightclub called Club Cameo. One person was killed and one is in very critical condition. The club caters to a very young clientele and it was crowded with hundreds of people. The parking lot was also packed, which made it very hard for the police to get to the scene initially. They have hired off-duty police officers as security who patrol the outside. They wanded and patted down everyone coming in, but somehow guns still got inside. There was a disagreement between several men and then these guys opened fire. It sounds like gang bangers, not terrorism.

The shooters are still on the run and there is not a whole lot of information on this. People stampeded when it started and ran. Many were wounded running away. Precious few are willing to provide information on the suspects. “Several local men got into some type of dispute inside the bar and it escalated into shots being fired from several individuals,” Cincinnati Police Chief Eliot Isaac said during a Sunday news conference. “As a result there were 16 people that sustained gunshot injuries 1 of which is deceased. A total of 15 others that were injured, 1 in extremely critical condition.” 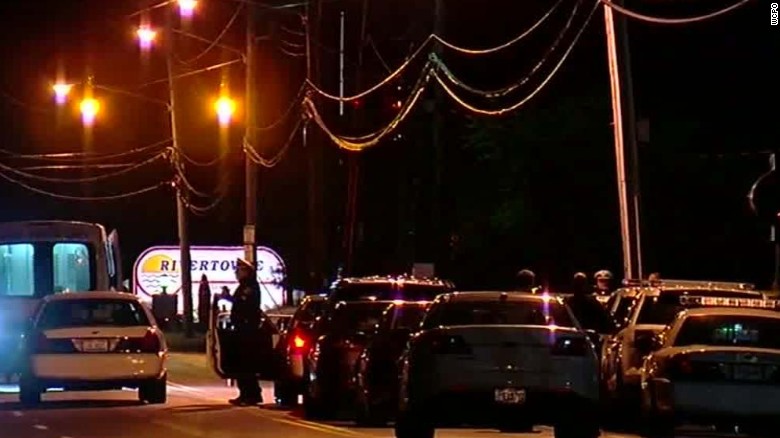 An early Sunday morning rampage at a nightclub in Cincinnati has left one person dead and at least fourteen people injured.

CNN reports[4] that authorities have confirmed that only one shooter was involved, despite early rumors of multiple attackers:

One person was killed and at least 14 others injured in a nightclub shooting early Sunday morning in Cincinnati.

Several of the shooting victims are undergoing surgery, Cincinnati Police Sgt. Eric Franz told CNN. Police do not have any suspects in custody, but are interviewing witnesses.

Cincinnati news station WLWT reports[5] that some of the victims are still in danger of losing their lives.

“We are in the middle of a very horrific situation that occurred at the nightclub with multiple victims. It’s going to be a long night for our homicide units to investigate.”

The man who died at the scene was 27 year-old Obryan Spikes. His family had been notified, Chief Isaac said. The victims were taken to four area hospitals. Some drove themselves and others were taken by ambulance. The police are not sure yet what prompted the shooting. There have been incidents at this club in the past, but nothing like this. I wonder if MS-13 has moved into the area.

Officers performed first aid and tried to save the person who died there, but it was too late. Cameo’s Facebook profile said it caters to college students on Friday nights, when anyone over 18 is allowed in, while Saturdays are “grown and sexy night” for ages 21 and over. They got a whole lot more than that last night. Let’s hope they catch the shooters and fast. I also hope that there is more information forthcoming on all this.

Cameos Update: Only one reported shooter at this time, still investigating if others involved.

Update: Motive is still unclear but there are no indications this incident is terrorism related.

Ref Cameo incident, confirming 15 total victims at this time, one of which is deceased. Continuing to investigate, no current updates.