The first mistake the burglars made was picking a lousy profession. Their second mistake was choosing to rob people in Texas of all places. Their third mistake was locking a homeowner in the WRONG CLOSET[1]. 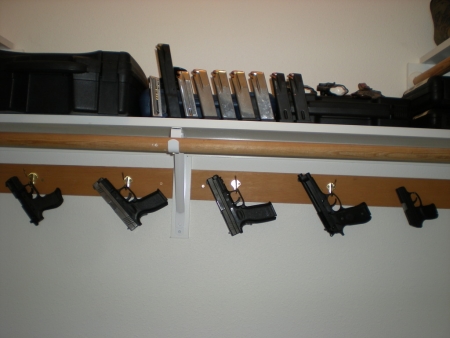 The victim of an armed home invasion in Houston has turned the tables on the brazen intruders after they stuffed him into a closet that turned out to be the place where he stores his gun.

Police say it all started at around 2pm Tuesday when three men broke into a home in the 8200 block of Braeburn Valley Drive and assaulted the resident.

After a brief scuffle, the hapless perpetrators shoved the man into a closet, not knowing that there was a gun in there.

…When the homeowner thought the burglars had left, he went downstairs, carrying his gun in case the suspects were still around, the Houston Chronicle reported.

On the first floor, the man confronted one of his assailant and the two exchanged gunfire, according to police.

The resident, who shares the house with his parents, escaped unharmed, but the armed suspect was much the worse for wear after being struck in the shoulder and leg.

He fled on foot down the street, but did not get far before he collapsed. His two suspected accomplices took off from the scene in a Chevrolet Tahoe.

If the man hadn’t been armed when he ran into that armed robber, the guy might have decided that the closet wasn’t going to hold him, so he needed to blow his brains out. Instead there’s one burglar in the hospital and two that ran for their lives. If liberals had their way, there would be strict gun control laws in place, the robbers would be armed and the homeowner would be dead. Is that a good idea? I bet that homeowner doesn’t think so.