The Cajun Navy[1] from Louisiana is in Houston with their boats rescuing people. Every one of them is a hero in my book. As they were trying to rescue more people, evidently looters started shooting at them. They were posing as victims to rob people. That’s not uncommon in situations like this. For a brief period the Cajun Navy had a stand down order until they could gets a plan together, but they are evidently back at it. They are worried, because people are now panicking and rushing their boats to get in. Things are getting even more dangerous.

In another encounter, someone tried to steal one of their boats after it broke down. The team had gone to seek shelter in a delivery truck and that’s when they tried to make off with the boat. “We have boats being shot at if we’re not picking everybody up. We’re having to pull out for a minute. We’re dropping an air boat right now to go rescue a couple of our boats that broke, and they’re kind of under attack,” a member said. Man, I hope they are armed. Tragedies like this bring out the very best in people. But they also bring out the very worst people who are looking to rob and hurt others. I would recommend they give the Cajun Army a wide berth… those guys can fend for themselves. 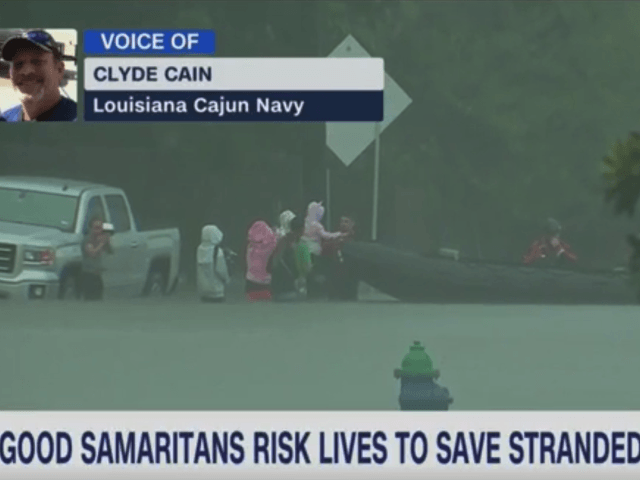 HOUSTON, Texas — Members of the Louisiana Cajun Navy were ordered to stand down from rescue efforts after members were shot at during an attempted robbery.

A message on the group’s Facebook page[3] stated that the team members are safe after looters fired shots at them during an attempt to rob them and steal their boat.

“Looters must not have wanted our boats in the water for rescues,” the official wrote. “We are currently on stand down pending a new strategic plan.”

Clyde Cain, one of the members reported to have been attacked, told[5] CNN they were shot at during a rescue attempt when they were unable to fit more people into the boat.

“They’re making it difficult for us to rescue them,” he said. “You have people rushing the boat. Everyone wants to get in at the same time. They’re panicking. Water is rising.”

On Monday, the Cajun Navy saved a woman they found floating face down. They have done countless rescues now and saved many lives. These are the good guys, no doubt about it. There are three “Cajun Navy” groups rescuing people in the Houston area. “The Cajun Navy” was the first group to respond to the emergency and are working in the Dickenson area. That group has not experienced any problems. The third group is called “Cajun Navy 2016.”

The Cajun Navy has become widely known for its response efforts during natural disasters and is made up of different groups. The group of first responders previously provided assistance to Louisianians during last year’s historic August floods. What would be unusual is if these groups didn’t run into anything like this. I remember during Katrina, there were all kinds of rough situations encountered. Houston is a different world, but there are bad guys everywhere these days. I hope everyone in the Cajun Navy stays safe and bless them for rescuing people this way.