Just last year, Governor Jerry Brown essentially made: California a: sanctuary state for illegal immigrants by signing the “Trust Act”[1] into law, which prohibits state authorities from handing over illegal immigrants to federal authorities if they have not committed ‘serious crimes.’ As if to double down on: efforts to destroy: the state, over 100: municipalities spanning about a dozen counties in California are choosing to ignore: immigration processes: pertaining to the detention of illegal immigrants who actually have been convicted of crimes.: Essentially, these municipalities are freeing deportable inmates once they have: served their jail term, instead of handing them over to federal authorities to be assessed for deportation.: According to Breitbart[2], 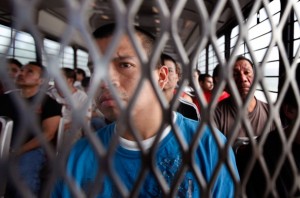 Officials in over a dozen counties in Southern California recently declared that detainer requests from federal immigration agents will be ignored–specifically, illegal immigrants eligible for deportation will no longer be held past the length of their jail times.

The announcement comes amid the revelation that more than : 36,000 criminal illegal immigrants: were released onto U.S. soil by government officials in 2013.

These actions reportedly[4]: have been: prompted by a recent federal court’s[5]: decision: out of the state of Oregon: which determined that an: illegal inmate’s constitutional rights were violated when she was held past her release date in order to transfer her into Immigration and Customs Enfacement (ICE) custody. Consequently, California isn’t the only state[6] with localities choosing not to comply with ICE.

The rulings have spurred several jurisdictions — from multiple Oregon counties to the city of Philadelphia — to announce they will no longer honor requests for such holds. Previously, some counties and states had already limited use of the practice, arguing it is expensive, erodes immigrants’ trust in law enforcement, and drags people with minor infractions such as traffic violations into deportation.

It seems as though there: is an: issue of ambiguity in the law, which is being exploited. In order to ensure: consistency in how states and localities: handle convicted: criminals who have entered this country illegally, there needs to be clarification with regards to the law as well as: consequences for non-enforcement.