I don’t know why people hack traffic signs, but sometimes they’re absolutely brilliant. I can’t tell if this one is actually in that category, or so outrageous that it’s funny.

I think I’ll let you be the judge. 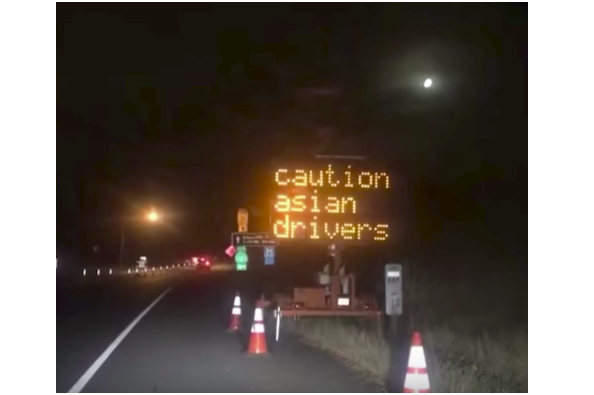 Who has the time to do this? Seriously, who sees a traffic sign on the fourth of July and decides to hack it and warn people to look out for “asian drivers”?

Darn kids and their technology.

Drivers in Napa, California, over the Fourth of July weekend came across a surprising traffic sign warning people of “Asian drivers.”

A motorist pulled over to film the illuminated sign, which read “caution asian drivers,” on Sunday night, according to CBS Sacramento.

Originally, the sign made drivers aware of a detour for a bridge replacement. While this hack is “LOL” worthy, it’s also dangerous because people were only made aware of the detour as they came up on it. When you’re driving a vehicle, you don’t want to be forced to slow down and make a decision quickly. Maybe I’m just a killjoy that way, but while I find this funny, I don’t think it’s necessary.

Apparently I’m not the only one who thinks this way. Caltrans advised the public to alert authorities to any altered signs, warning that they could not only create a distraction, but also a safety hazard.

“Caltrans policy is to always lock the sign control boards which also require a secret code to operate,” Jacala said. He warned that anyone who sees an altered highway sign should contact authorities immediately “as bogus information can be not only be a distraction but also create a safety hazard.”

HuffPo goes on to complain about the myth of “Asian drivers” being terrible and never using their blinkers, but that’s because they’re weenies who can’t take jokes.