Chechen President: American Upbringing At Fault For The Boston Bombers

Ramzan Kadyro, the President of Chechnya, decided to give his condolences to the American people for the Boston Marathon Bombing. So far, so good. But, he couldn’t just leave it there (Emphasis mine). 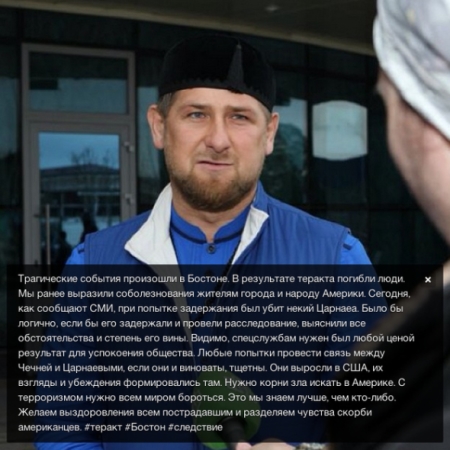 Tragic events have taken place in Boston. A terrorist attack killed people. We have already expressed our condolences to the people of the city and to the American people. Today, the media reports, one Tsarnaev was killed as [police] tried to arrest him. It would be appropriate if he was detained and investigated, and the circumstances and the extent of his guilt determined. Apparently, the security services needed to calm down the society by any means necessary.

Any attempt to draw a connection between Chechnya and Tsarnaevs – if they are guilty – is futile. They were raised in the United States, and their attitudes and beliefs were formed there. It is necessary to seek the roots of this evil in America. The whole world must struggle against terrorism – that we know better than anyone else. We hope for the recovery of all the victims, and we mourn with the Americans.

The great irony here is that it wasn’t as if Americans were already pointing their finger at Chechnya. However now, Ramzan Kadyro’s statement will undoubtedly remind Americans what a ratty little hellhole that country is and may start to make them wonder for the first time if the bomber’s upbringing in Chechnya had something to do with the murderous attack.