Minati Roychoudhuri, a college professor, was pulled over a few months ago for an improper lane change and cited. She fought the ticket, but not by the usual means of mitigation in a court of law. She decided that she would throw down the oh-so-tired race card, claiming she was ‘unfairly and racially profiled’ by a state trooper, alleging that he asked her if she spoke English.
The thing she didn’t think about was the fact that most police officer’s vehicles are equipped with AT LEAST audio recording and video recording these days. The audio led to an arrest warrant issued against her, and she turned herself in on July 28.[1] 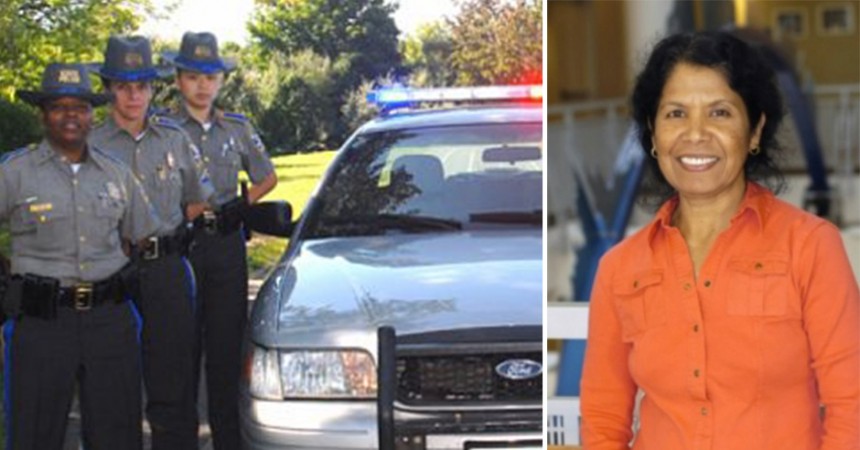 According to Fox CT, 32-year-old Minati Roychoudhuri claims that an officer in an unmarked police car pulled her over as she was exiting in Wethersfield, Connecticut. Roychoudhuri stated, in a letter she sent to the Commissioner of Public Safety a month later, that the officer asked if she could speak English and did not explain why she had been pulled over.

In the letter, Roychoudhuri also wrote:

I am a Professor in English at Capital Community College, I teach about diversity and the negative impact of racial profiling, I have now become a target of the same insidious behavior! It is easy to connect the dots with the nationwide racial profiling which has led to serious consequences.
In a sworn statement taken on June 15 about the allegations, Roychoudhuri repeated that she has been racially profiled and that the officer did not explain why she had been stopped. Her signed statement, which was taken in person, included notification that it “is a crime for her to make any claims that she doesn’t believe to be true in an effort to mislead a public servant.”

A review of the dashcam audio reveals that the officer never asked Roychoudhuri if she spoke English, and very clearly explained to her why he had stopped and ticketed her. The traffic stop begins with the officer asking if she knows why she has been pulled over. When she says that she does not, he explains:

OK. There’s that big gore area with white lines painted across it and you cut in front of it, in front of me, thinking it’s a lane or something. You have to wait until it’s a dotted white line. License and registration.

The President of the Connecticut State Police Union, Andrew Matthews, told NBC Connecticut that the union wants an apology from both Minati Roychoudhuri and her employer, Capital Community College:

That she would make a complaint of racial discrimination against a trooper who never did it and to publicize that is really what’s concerning to us. Their employer should not only hold them responsible but should apologize on their behalf.

Haha. YES! Unlike her accusations, these are actually true. What sweeter justice than exactly what she tried to do to an innocent trooper, soiling his name and dragging him through an IA investigation? No one needs that on their record. This lady deserves everything she gets, and though the private sector is much less stringent than the police force, I hope the college president takes her to task on this.

IF it was true he pulled her over based on race, then yes, she had every right to do exactly what she did. She should write a letter. She should be aggressive and demand an apology. I support the rights of others to be able to live free of racial bias and racial profiling. Cases like these, where there is nothing more than a cheapskate behind the wheel that apparently is unaware of traffic laws at gore points, is ridiculous.

Racism is a big deal to be accused of. Not all incidents are unfounded, but getting a traffic ticket you don’t want to pay after performing an illegal action isn’t something that actually constitutes racism. As a professor of English, perhaps she should know THAT.