Confessed Killer Of U.S. Soldier Gets Apology And $10 Million From Trudeau Government

I just cannot fathom this.[1] I thought Canada was a neighbor and a friend. If this is the case, not so much. Socialist Trudeau and his liberal government are prepping an apology for Omar Khadr, who spent time in Gitmo for killing a US soldier. He will be awarded $10 million in reparations. They say it is to give him damages for interrogation at the hands of Canadian security that was deemed “oppressive” by the Supreme Court of Canada. This Jihadist has American blood on his hands… not only was he released from Gitmo, he gets an apology and $10 million? He should have been put down long ago. This really angers me.

From the time this Canadian al Qaeda terrorist was 15, he was on the battlefield killing infidels. In Afghanistan, at the age of 15, he murdered a US Special Forces medic Sgt. Christopher with a grenade. Trudeau would neither deny or confirm the settlement, but he says the case is coming to a close, indicating that this is indeed true. It’s an outrage. Speer’s widow, along with another soldier who was blinded by the grenade attack, filed a wrongful death and injury lawsuit against Khadr in 2014 because they suspected Khadr might receive financial compensation if he was successful in appealing his sentencing. And sure enough, that’s what is happening.

Canada’s Liberal government is prepared to provide an apology and $10 million to the confessed killer of a U.S. soldier who spent time to Guantanamo Bay.

According to multiple reports Tuesday[3], Omar Khadr will be compensated in part because his interrogation at the hands of Canadian security was deemed “oppressive” by the Supreme Court of Canada.

Khadar, who was born in Canada, was fighting with al-Qaeda forces in Afghanistan when he was 15. In a shoot-out with U.S. forces, Khadr confessed to killing U.S. Special Forces medic Sgt. Christopher Speer with a grenade.

Canadian Prime Minister Justin Trudeau, who is in Ireland en route to Friday’s G-20 Summit in Germany, would neither confirm nor deny the reports but strongly suggested their validity.

A US judge awarded the other soldier who was wounded and the widow of Speer $134.2 million in damages in 2015, but the plaintiffs have acknowledged that they don’t expect to receive any of the money because Khadr lives in Canada. Instead, Canada will give this Islamist millions. How screwed up is that? Khadr was captured in Afghanistan and taken to Guantanamo Bay, where he was charged with war crimes by a military commission.

In 2010, this murderer pleaded guilty to multiple charges, including murder. He received an eight year sentence, which in my book was a travesty all by itself. Under Barack Obama’s administration, he was sent back to Canada in 2012, where he was supposed to serve out the rest of his pathetic sentence. But instead, he was released in 2015. His attorneys claimed that his confessions was obtained under duress. He was the youngest prisoner at Gitmo and his attorney played on the fact that he appeared to be child soldier. If you are old enough to kill on the battlefield, you are old enough to pay the price.

The apology and compensation[4] is similar to the $10.5 million that Ottawa gave Syrian-born Canadian Maher Arar after a 2006 judicial inquiry found Canadian officials had passed on information about him to US national security authorities, leading to his torture and imprisonment in Syria. Last March, Public Safety Minister Ralph Goodale issued an apology and compensation packages to three Muslim Canadian men – Abdullah Almalki, Ahmad Abou-Elmatti and Muayyed Nureddin. They had been tortured and held for months in Syria and Egypt, suspected of links to terrorism. So, this is now a habit with the Canadians… apologizing and paying millions to those that kill Americans and other Kuffirs. Sick… Canada is lost. 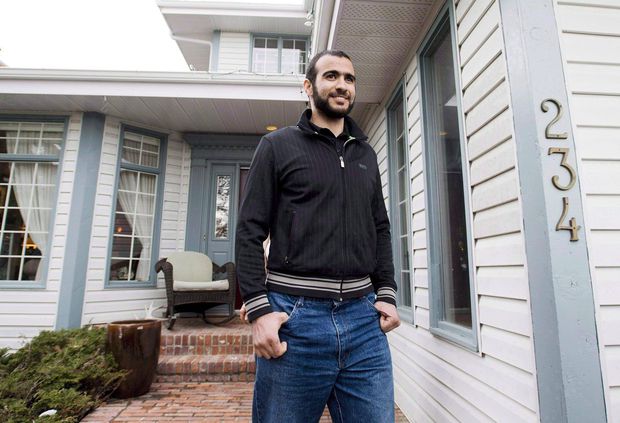