Confirmed: The Boston Marathon Bombers Were Both Muslims

After a terrorist attack, there is always a lot of speculation about motives. Are they nuts, Weatherman wannabes, anti-government McVeigh types, freelance Islamic terrorists, etc., etc.

In this case, the answer appears to be freelance Islamic terrorists.

Both Tamerlan and Dzhokhar A. Tsarnaev are Russian born Muslims from a region near Chechnya.

Tamerlan Tsarnaev, who is now deceased, was a Golden Gloves boxer. Here’s part of what was written about him in a 2009 Lowell Sun profile.

Tamerlan says he doesn’t drink or smoke anymore: “God said no alcohol.” A muslim, he says: “There are no values anymore,” and worries that “people can’t control themselves.”

On the other hand, Dzhokhar (Djohar) A. Tsarnaev, checked in on Russian Facebook YESTERDAY and he lists his religious preference as Islam. 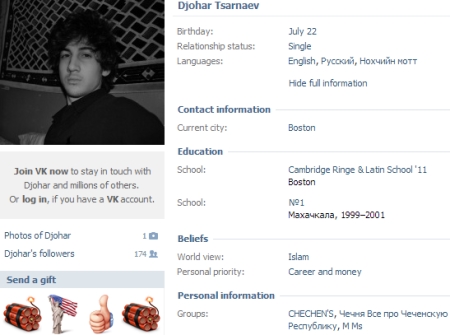 Somewhere in the bowels of MSNBC, Chris Matthews is kicking a wall and trying to figure out how to blame this on the Tea Party. Not this time, Chris. Not this time.