If you don’t think there is a war on cops taking place in this country, then boy do I have some news for you.

Some people will hate LEOs for no reason other than the fact that they are doing the jobs they signed up for. These brave men and women put on the uniform every day knowing that they could be killed in the line of duty, never to see their loved ones again.

There is disturbing video of an officer being shot in the neck at point blank range and managing to radio for help. But it’s what he says about his family that will bring tears to your eyes and make your blood boil with hatred toward his shooter. 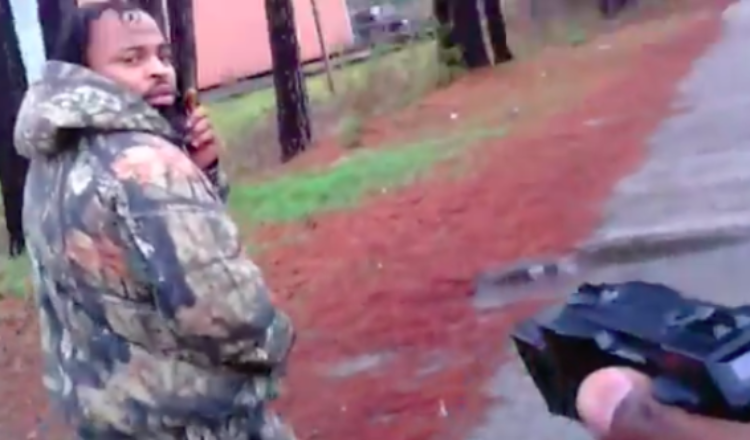 Officer Quincy Smith of the Estill Police Department in South Carolina was called to a local store on New Years Day of 2016. He was responding to reports of a man loitering outside the business and taking items from customers.

Smith pulled up on Malcolm Orr, who was dressed in camouflage and politely asked the man to stop. Orr was on his cellphone at the time and had his right hand in his pocket. Smith asked him to stop walking and remove his hand from his pocket and threatened to taze him if he didn’t cooperate. After a few more steps, the officer’s body cam captures the moment that Orr pulled a 9mm handgun from his pocket and opened fire on the officer.

Running back to his vehicle, Smith radioed dispatch and alerted them to the situation. He also told them that he had been shot in the neck and made a request that would break the heart of everyone who knows and loves any LEO.

You can see the blood on the officer’s hands as he calls for backup and you can hear the terror in his voice as he begs for help.

My favorite part of this is the kind bystander who called 911 and offered to stay with the officer until the ambulance arrived. There are still good people in the world and we need to shine a light on that.

Thanks to this camera, which the officer bought with his own money on Amazon, it helped get Orr convicted on one account of attempted murder and possession of a deadly weapon. The jury found him guilty in just 45 minutes and sentenced him to 35 years in prison.