Not only are these monsters cruel, but they were foolish enough to think that other people on Facebook would find their inhumanity amusing[1]. 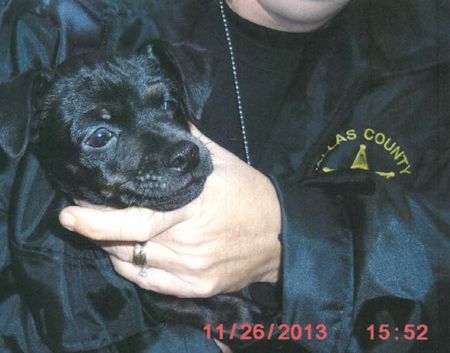 The Dallas County District Attorney’s office says a court hearing is now set in an animal abuse case that was discovered after authorities say a Facebook photo post led them to a couple who hanged their small dog from the ceiling.

….Graphic pictures released by Jackson’s office show a small, black puppy strung up and dangling from the ceiling of a Valley Grande home – photos the dog’s owners snapped and posted to Facebook. (Note: WSFA 12 News made an editorial decision to redact those images from our coverage.)

“They decided that they were going to hang a dog from the ceiling by its neck. The poor dog was hanging from the ceiling with some kind of rope around its neck,” said Jackson, District Attorney for Alabama’s 4th Judicial Circuit. “What their motivation was, we don’t know at this point. It’s still under investigation. It was just very callous to have it posted on Facebook. I guess they thought it was a joke or something to hang a poor little dog.”

The incident happened in late November on County Road 63. Jackson said it’s unclear exactly how long the puppy was left hanging from the ceiling, but it did survive the incident.

Dallas County investigators were tipped off about the Facebook post and launched an investigation into the puppy’s owners. Dunnam and Parrish turned themselves in on January 10th for animal cruelty.

Dunnam captioned the post on her Facebook page with pictures of the bizarre event: “My poor baby.”

Comments on her Facebook page show she was receiving criticism over the post but she fired back, admitting to hanging the dog and saying she didn’t care what anybody thought.

As for her pet, the small mixed breed puppy suffered minor injuries, including a broken tooth, and Animal Control removed the dog from the couple’s home. Now four months old, he is being cared for at the Selma Animal Hospital.

The staff calls him “Timmy” and they say the shy dog come out of his shell as he recovers – his case shedding light on animal abuse in the area.

Wow, they titled their post, “My poor baby.” In other words, look at us torturing our dog! How funny! Then when people complained about them HANGING A PUPPY FROM THE CEILING, they fired back against what they considered unjust criticism. After all, what sort of uptight jerk would hassle someone just torturing a helpless puppy?

How do these people live with themselves?