Most newlyweds spend their honeymoons doing something romantic. They go to exotic locales, see local sights and enjoy their time together as a married couple. But this couple had something different in mind. Instead, they spent their honeymoon in jail after kidnapping and raping a woman[1]… and then going on a naked run to get soda. 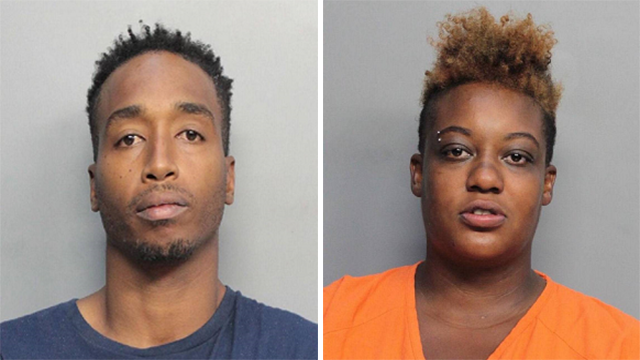 Rashada Hurley and Timothy Lowe were vacationing in south Florida, but instead of soaking up the sun at the beach, they decided to add violent crime to their to-do list. Hurley, 32, and Lowe, 37, were at a Hialeah supermarket when they saw a 27-year-old woman backing out of a parking spot. The woman’s window was down, giving the violent couple the opportunity to attack.

The couple confronted the woman and then Hurley got out of their car and struck the woman over the head, knocking her unconscious. The woman said that when she woke up, she was being choked by Hurley, while Lowe drove her car. The couple took their victim to a Motel 6 in her own car, where Hurley used the woman’s credit card to purchase a room. The woman was raped by Lowe, and forced to perform oral sex on Hurley. But somehow, the woman was able to escape.

But Hurley and Lowe weren’t finished yet. The next day, they decided to take a stroll to a convenience store to get some soda… but they did so completely naked, and stole the drinks. The police found them a block away, arrested them and covered them up with blankets. Their victim identified them in a photo line-up and the two were charged with kidnapping, carjacking, robbery and sexual battery. Both Hurley and Lowe are reportedly from Georgia, but a specific hometown was not listed.

Miami-Dade County Judge Victoria Sigler said that the two had “one hell of a honeymoon.”