Couple Survives Drug Crazed Home Invader Because of Their AR-15

Philadelphia, PA — A couple whose names are being withheld by police were outside of their apartment on Friday, when Jasper Brisbon, who they said appeared to be on drugs, walked up and began staring at them. He did this for several minutes as the couple grew increasingly uncomfortable. Eventually, they decided to go inside of their apartment to get away from Brisbon, but he followed them. 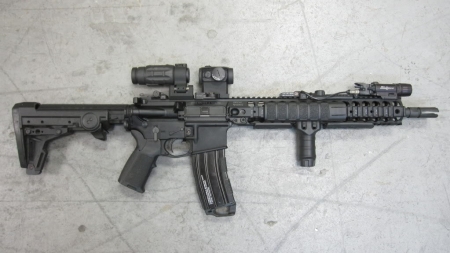 That’s when things really took a turn for the worse.

When the man opened the door, Jasper Brisbon pushed his way past them into the apartment.

At that point, the man grabbed his AR-15 semi-automatic rifle and told Jasper Brisbon to leave. Brisbon refused his request and started moving towards him in a threatening manner. That’s when the man shot him in the chest and sent Brisbon to the ground. Afterwards, the man called police.

Although the police are still investigating the incident, it was noted that Brisbon was charged with aggravated assault in December. If the gun grabbers had gotten their way and prevented that couple from owning an AR-15, they’d probably be nothing more than two DEAD crime statistics today. Instead, they’re still alive and walking around, while the crazed man who broke into their apartment is no longer here. Thank you, 2nd Amendment, thank you!