A teacher[1], church leader and father of two, has been accused of hosting parties during which teenage boys were encouraged to get naked. It was later reported that several different sexual activies occurred in the home. 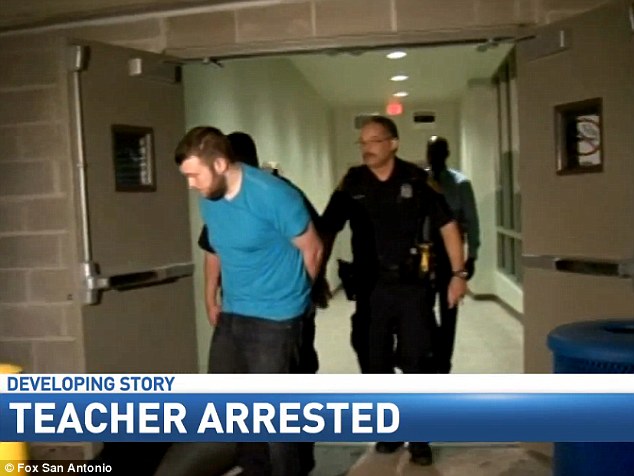 A Texas high school teacher and church leader has confessed to hosting parties where he encouraged up to 12 teenage boys to get naked and performed sexual acts with them, police said.

Jared Anderson, 28, has been charged with sexual assault of a child, sexual performance of a child, possession of child pornography and indecent contact and exposure with a child.

Authorities said Anderson, a married father of two – including a toddler son – hosted multiple parties at his home over the last several months.

The most recent was called a ‘Bros night’ on February 12 and included seven boys ranging from 15 to 17 years of age.

A post-it note on the door read: ‘The last one to get naked has to get the first dare’, police said.

Anderson then instructed the boys to strip off their clothes and play games while he walked around ‘naked with an erection’, according to the police report.

The boys were instructed to ‘crawl around naked and touch each other’ and ‘place their genitals on another boy’s face’, authorities said.

He also had the teens wrestle each other and hug him while he was naked, according to KENS 5.

Anderson’s mouth also came in ‘contact with a boy’s genitals’, the report reads.

Police said at a different party, Anderson challenged a 17-year-old to see who could be the most ‘obscene’, which involved them sending pictures ‘of their genitals to each other’.

Parents of two of the victims reported the incident last week to Anderson’s church and the San Antonio Police Department.

Seven to 10 victims, all between the ages of 15 and 18, have since been identified by police, according to My San Antonio.

Police said seven of the boys have given statements as of Wednesday, but they expect there may be as many as ten to 12 arrest warrants.

It’s unbelievably sad that you can’t trust anyone anymore.