The officer, Nicholas Smarr, was only 25 years-old and fatally shot when he responded to an incident at Georgia Southwestern State University. The criminal who shot him also took his own life, proving that the perpetrator killed the cop for no apparent reason. People who plan to commit suicide should just kill themselves and not harm anyone else in the process.

Reports state that the reason the Georgia teen was caught on video[1] is because of a previous incident that happened at the grave. The mother of the deceased police officer saw footprints on the black granite grave marker. Then another day she saw mud and dirt and it was clearly displaced. It didn’t seem to be an accident if the markers nearby were still clean and not walked upon. Smarr’s mother set up a video camera to see if she could catch anyone desecrating her late son’s grave. To her utter shock and horror, she did exactly that. She caught the suspect on camera doing disrespectful things.

The teen was identified, arrested and charged with criminal trespassing. 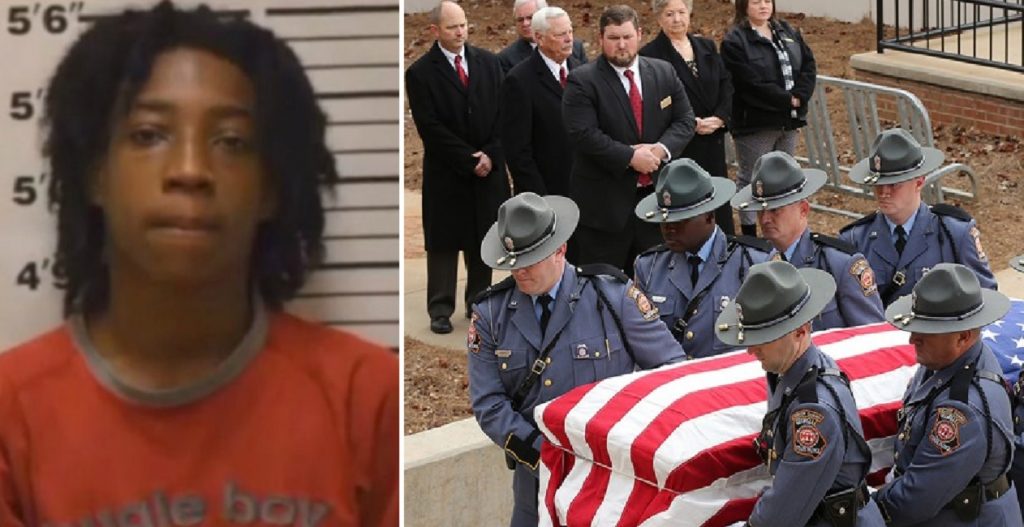 The Blaze[2] is reporting:

Nicholas Smarr was a 25-year-old officer with the Americus, Georgia, police department who was fatally shot in the line of duty last December, along with his best friend, Jody Smith, an officer with Georgia Southwestern State University. They responded to domestic violence call when a man, who later took his own life, fired at them.

Last week, Janice Smarr saw footprints on her son’s black granite grave marker in Oak Grove Cemetery, the Telegraph reported. On another morning mud and other objects were on the marker, Americus Police Chief Mark Scott told the paper.

Smarr’s mother believes her son may have arrested Chambers before, which might prove to be why his grave was singled out by the man.

Along with Chambers, three 16-year-old girls were also arrested, two of whom had prior records. They were charged with obstructing a police officer, and violating curfew.

I’m not sure what kind of person goes out of their way, possibly multiple times, to desecrate a grave. And what kind of sick person brings friends to do it with? That is just out of the world disrespect that no one should ever experience. The teen needs to be thankful he’s alive and not in prison. He has his entire life ahead of him and he’s wasting time being a disrespectful person towards someone who can no longer defend themselves. That’s just a weak minded person showing they have no real agenda or meaning in life. If all someone can do is look forward to trespassing in a cemetery to desecrate a grave, then that person really needs to stop being a loser. There’s much better things people can do in life.

The officer’s mother believes that her son may have arrested the teenager at one point and that could be why the teen continues disrespecting the grave. The funny thing is, her son still gets the last laugh as the boy was arrested yet again.

Georgia considers 17 year-olds adults, so hopefully the teenager is charged as an adult. Maybe he’ll finally learn his lesson and take his life in another direction that is more meaningful.

He needs to stop following the anti-police agenda set in place by groups such as Black Lives Matter and former President Obama. You cannot make peace with the police if you’re constantly disrespecting them.

That’s not how this works.