‘Done With The Legal Way’: Mother Is Arrested When ‘Abusive’ Ex-Husband Goes Missing After Police Failed To Charge Him…

A Texas woman[2] is alleged to have taken matters into her own hands and made sure that her ex-husband won’t get another opportunity to abuse her or their 4 year-old daughter. Police believe that Kristen Anne Deal Jennings, of San Angelo, killed Eric Torrez, who went missing July 21st in Abilene. His body has not been located, but because Ms. Jennings posted on social media that she had tried and failed to have him arrested, and that she was “done with the legal way,” she has been arrested.

Police have stated that they found evidence to suggest that Mr. Torres was the victim of a homicide. They believe he is dead. The 28 year-old Jennings was angry that police did not indict 41 year-old Torres on charges of abuse of her and their four year-old daughter. Torres had custody of the child. Jennings apparently burglarized the home where Torres was living, assaulted his mother and took the child. She is thought to have killed Torrez. His truck was found in a shopping center parking lot, but no body has been recovered.

“At this time, Eric Torrez has not been located,” the Tom Green County Sheriff’s Office, said in a statement. “Evidence collected at the residence of Jennings and information obtained through interviews and interrogations indicate Eric Torrez is the victim of a homicide.” 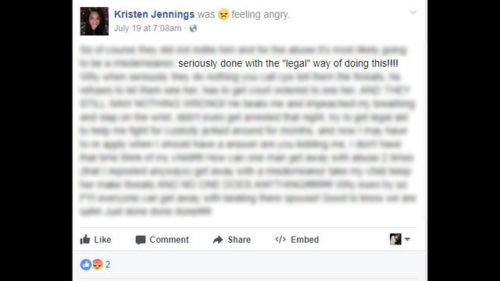 In her Facebook rant, Jennings said, among other things, “He beats me and impeached my breathing and slap on the wrist, didn’t even get arrested that night, try to get legal aid to help me fight for custody jerked around for months, and now I may have to re apply when I should have a answer are you kidding me, I don’t have that time think of my child!!!!” 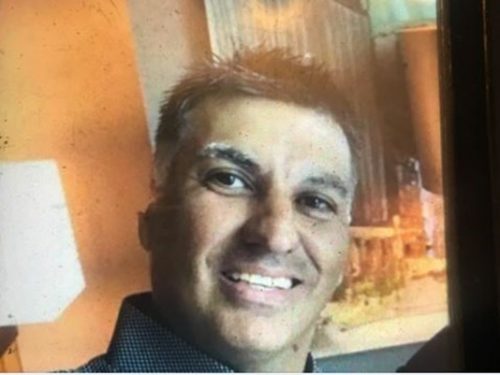 Stephen Lynn Jennings, her current husband, has also been arrested on evidence tampering charges. And Jennings herself has been released on 50,000 bond.

No one knows what happened to Torrez. But as this case progresses, we may find out. One thing is for sure, this is not the way to handle a dispute.