What you are about to see here is the true thought process of an Islamic fundamentalist. For anyone out there who thinks that Islamists don’t think that rape is totally acceptable as it relates to the punishment of females or to women that are sex-slaves or their wives, you need to open your eyes to the truth. Nabih al-Wahsh is an Egyptian lawyer who appeared on satellite channel Al-Assema. There he stated that if a woman wore ripped jeans and her legs showed, that raping her would teach her self-respect. That in fact, it was a man’s ‘national duty’ to rape her. That’s truly how these barbarians think.

This guy was roundly attacked for his statements as he should be. In his world, sexual harassment (the real, violent kind) and rape are totally acceptable forms of behavior for Muslim men. Al-Arabiya reports that he says that if any part of a woman’s leg shows, she is inviting harassment and rape and only has herself to blame. Oddly enough, this outrageous proclamation came as the invited guests were discussing laws on ‘inciting debauchery’. Savor the irony of that. 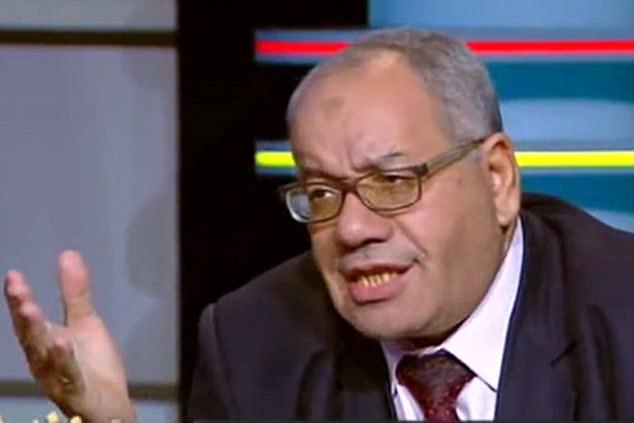 Al-Wahsh added to the discussion once again that raping women who wear ripped jeans is ‘a national duty’ for Egyptian men, implying that this would not only be what the women deserved, but a way for them to learn self-respect. This guy is a monster. He said: “Girls must respect themselves so others respect them. Protecting morals is more important than protecting borders.” Do tell, because he doesn’t believe in borders at all unless they are Islamic borders obtained through conquering people. What morals? Those of Attila the Hun?

This guy has done something similar to this before on air. Last year, he appeared on a talk show with an Australia-based imam who argued that wearing a hijab is a choice and not a religious requirement for Muslim women. This infuriated Al-Wahsh, who took off his shoe and beat the imam on the head with it on live television. Beating with shoes is a famous pastime of Islamic radicals. It somehow shows major disrespect.

The Head of the National Council for Women Doctor Maya Mursi condemned Wahsh’s shameful remarks as a “flagrant call” for rape and said they violate the Egyptian constitution which protects women from all forms of violence. Mursi also voiced surprise that these statements were made by a lawyer who is tasked with defending rights and freedoms. I don’t know why she is surprised… she knows what a goat this man is. She added that the council will file a complaint to the attorney general against Wahsh and Al-Assema, adding that the council had also filed a complaint to the Supreme Council for Media Regulation. Good luck with that. The council also urged media outlets not to host such controversial figures who make remarks that incite violence against women.

I have numerous friends from Egypt, albeit they are all Coptic Christians. This is not a moral or even humane outlook on life. It’s twisted, perverse and evil, just like this guy is. I’d like half an hour and a stiletto with this jackass. He would not like the results, but he would learn respect.