Every Police Officer MUST See This Weaponized Pack Of Cigarettes! [VIDEO]

Police officers need to be briefed on a disguised weapon that’s possibly trending among criminals. It’s a taser that looks like a pack of smokes. The officers found this when a suspect kept asking if they could smoke inside their vehicle. They had not lit one up yet, but persisted upon repeatedly asking the officers about smoking. The officers noticed the suspect being very weird about it and still said no.

The cops noticed something really strange with the person’s pack of smokes. Something just wasn’t right. Between the odd behavior and the strange look/feel of the smokes, the officers decided to look a little bit more into it[1].

That’s when they unraveled what was really in the box and it was not smokes. It was a taser. The box of smokes had a hidden taser. This is a weapon made to look like a regular everyday item. A weapon in plain site that was thankfully taken by the Kennesaw police. 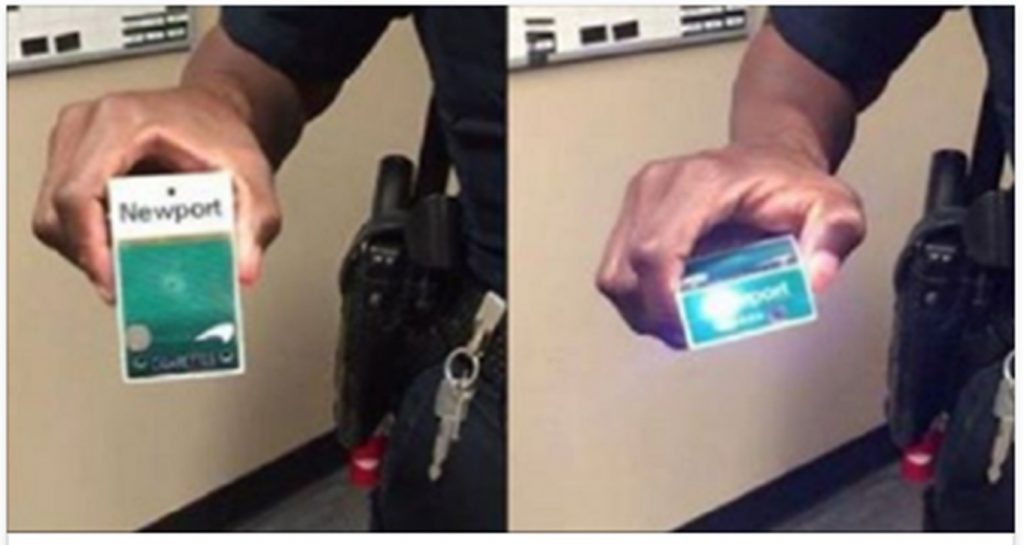 This item was found in a vehicle during a traffic stop. While the officer was speaking to the driver outside of the car, the driver repeatedly asked to have a smoke which was located inside the vehicle. The answer was no. In the end, the only “smokes” found was the item in the video. You would be surprised at the type of weapons that have been made to look like “normal items”.

So, forgive us when we seem to act “too rigid” and “mean” when we say no to your request to “smoke” or “make a phone call” with your phone, etc… We’re just trying to make it home at the end of our shifts like everyone else out here.

Here’s a video showing how the weaponized pack of smokes works. You can see and hear the shocking bursts of electricity. Depending on the strength of the voltage, that little thing might be capable of leveling a full grown man to the floor.

If you’re pulled over and your first desire is to smoke, then you have something wrong with you. You should be more worried about what’s happening, why and how you’re going to act when the officer arrives at your window with a tap, tap, tap.

Cops want to do their job and go home. It’s time that we all realized that being an officer of the law is just like any other job in America. Cops go to work, do a job, then want to go home. It’s just like our job except being a police officer is probably a lot more stressful and physically demanding.

Just imagine dealing with some of the worst people ALL DAY LONG. Think about that the next time you get pulled over. Give the police some respect and you’ll always get it back. Start hooting and hollering at them and you’ll get the same treatment back to you.

And folks, do not ask to pull out a taser disguised as smokes when you get pulled over. That is a very bad idea that could literally get you shot or locked up for a very long time.

It’s not worth it.

Hopefully police everywhere have seen the video above and are aware of any weird looking everyday items that people carry.