Ex-SWAT Deputy Grabs His Shotgun To Give A Message To Hurricane Harvey Looters! [VIDEO]

For all of the good we’ve seen coming from the people affected by Hurricane Harvey and those who want to help, there was inevitably going to be some looting in the city of Houston. You simply can’t put that many people together without a few of them being bad apples.

But an “ex-SWAT deputy” has decided that he wasn’t about to let looters do their thing while he was around. He snagged his shotgun and made it very clear that he has a zero-tolerance policy for criminal behavior. 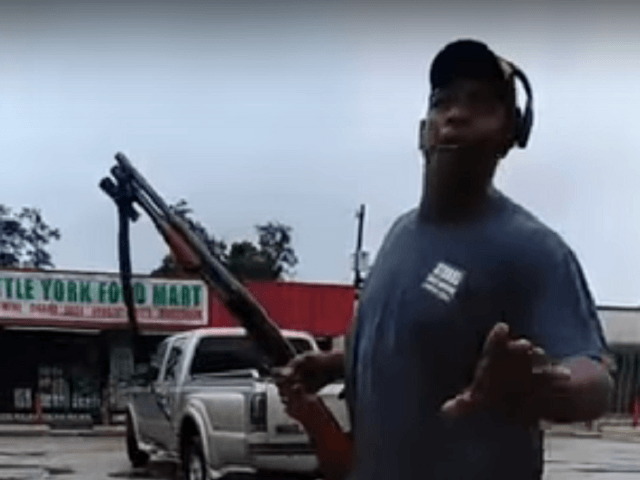 A shotgun-toting gentleman was stationed outside the Little York Food Mart on Houston’s east side when a woman with a camera approached him to ask what was going on.

While talking about the looting that was taking place, he notices something happening off-camera. That’s when it gets real.

“Hey! Don’t go back in that store,” he yells. “I’m telling you one time: I’m not scared to shoot you, I’m an ex-[expletive] SWAT deputy. I will cut your [expletive] in half.”

We know that emergency responders were told to prioritize life-or-death situations[2] above all others, meaning that looters will get away with their crimes simply because the police force doesn’t have the manpower to deal with such a petty crime.

That is when this man stepped in to make sure the laws are observed by those who would otherwise take advantage of the situation to steal more shoes, televisions and other equally-useless items.

“If you’re looting, you’re stealing,” he stated. “It’s a violation of Texas law and federal law in a time of a catastrophe. Do not enter people’s homes. The Constitution says you’ve got the right to protect yourself and bear arms.”

Houston Police Chief Art Acevedo did promise to “go after looters aggressively,” adding that he “cannot tolerate people hurting our people while they are already hurting from this storm.”

Is this man a hero or a vigilante who needs to go home and wait for the police? Let us know what you think!