Father who poisoned, tortured and strangled his 3 and 4-year-old children is sentenced to death as he testifies in court and to their weeping mother ‘I love my kids’

Both of these monsters are blaming each other…[1] they both should get the death penalty. It seems obvious to me that they killed the children because both of them wanted to be rid of them. It was not out of pity or wanting to end their suffering – it was cold, calculated heinous murder. Then they threw them away like they would the trash. I would bet there was a very good chance of sexual assault as well that will never be proven now. The father poisoned his 4 year-old daughter and 3 year-old son with anti-freeze and then strangled them. Then he dumped them. Now he claims it was out of love and the mother weeps. If it were up to me, their deaths would be very slow and agonizing. A fitting end for two demons masquerading as parents. 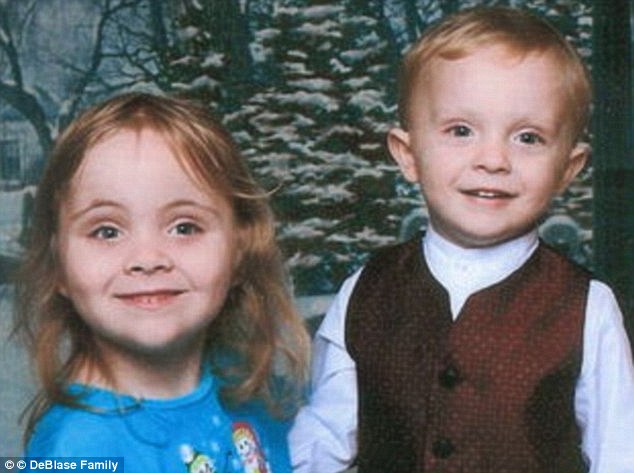 Gruesome: The 31-year-old father poisoned four-year-old Natalie (left) and three-year-old Chase with anti-freeze before strangling them and dumping their bodies in Mississippi in 2010.

A father who tortured and killed his three-year-old son and four-year-old daughter has been sentenced to death.

John DeBlase from Mobile, Alabama, was found guilty of two counts of murder in November for poisoning Natalie and Chase with antifreeze and strangling them.

The 31-year-old and his wife Heather Keaton – who will also be tried for the killings in April – were then arrested after the children’s bodies were dumped in a rural area in Mississippi in 2010.

Chase’s remains were found six months after he was killed.

The pair’s biological mother, Corinne DeBlase, wept silently as the court heard how the search for her children unfolded before he was sentenced on Thursday.

According to AL.com[2] Circuit Judge Rick Stout had two options in deciding DeBlase’s fate: either life without possibility of parole or death by lethal injection.

He told the court that the killings were ‘especially heinous, atrocious and cruel,’ and included ‘completely consciousless, pitiless torture of the victims.’ He then sentenced DeBlase to death after it was suggested by the jury.

During the trial John DeBlase’s attorneys argued that Keaton’s harsh discipline tactics lead to the children’s deaths, but prosecutors said DeBlase likely killed the children to end their suffering.

‘I don’t think there’s any doubt that the person who had the motive and hatred was Heather Keaton,’ defense attorney Glenn Davidson said during his closing arguments Tuesday.

‘She had no regard for the children and evidence showed she had no concern for their safety or their well-being. She was consumed with jealousy of Natalie’s relationship with her father. When she couldn’t control the children, she killed them.’

Earlier in the trial, Corrine DeBlase said she had given up custody of her daughter Natalie, four, and three-year-old son Chase to John DeBlase in 2008 because she thought he was a ‘good father’.

‘He was their father, he was supposed to protect them. That’s what a father is supposed to do,’ she told the jury.

Mrs DeBlase said she had been forced to give up custody of her ‘well-mannered’ children after she lost her job and home, and her marriage collapsed.

She said that her ex-husband mainly treated Natalie like ‘his little princess’, but had once ‘popped her in her mouth’ when she was suffering from a night terror, according to AL.com.

The mother was jealous and they both hated the children. They used them, abused them and discarded them. What kind of soulless, heartless beast does this to their own children? The judge got it right thank goodness – I trust the mother will get her richly deserved death penalty as well. I would like to see both of them beg for their lives, because their little ones never got that chance. If creatures from hell walked the earth, they would look and act like this. I say faster, faster pussycat when it comes to the needle for both of them.