Father and husband Mark Chetwynd of East Kingston, New Hampshire wasn’t going to let an escaped convict hurt him or his family last weekend so he grabbed a baseball bat and took after the convict who was trying to escape police. 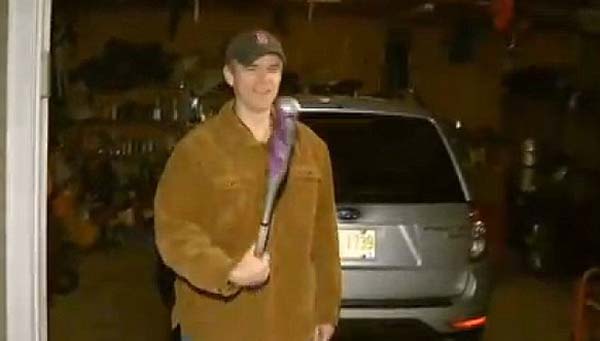 The criminal, Tyler Beliveau, was still in his orange jumpsuit after escaping from the hospital and stealing a snow plow that was sitting and running at the curb when he left the building. Beliveau drove the plow at high speeds and eventually smashed it up sending him on foot and soon to encounter the Chetwynd home.

‘I could see through the trees something orange, really, and then it came closer and closer and I could see it was a person,’ he recalled to MyFoxBoston.

Beliveau had driven five miles in the plow-equipped truck before crashing near Chetwynd’s home.

Beliveau had managed to escape while he awaited an x-ray at a hospital. The plow truck was running at a curb while he fled and the driver was not inside, police say.

After the crash, he began trudging through the snow-covered woods in his orange jumpsuit, wearing no shoes and still shackled at the feet.

As the criminal approached, Chetwynd yelled for his daughter to run inside and lock the door.

That’s when he grabbed an aluminum bat and approached the convict right as he climbed into Chetwynd’s truck.

Goon on ya, Mark Chetwynd!