A scumbag who raped and murdered his own eight month-old daughter in Detroit, has been arrested and charged. The judge was not easy on him, as he set the bail at $2 million, all the while the creep was blubbering[1] through, asking to call his mother.

James Saltmarshall was charged with felony murder, first-degree child abuse and first-degree criminal sexual conduct in the killing of his own flesh and blood baby girl, Janiyah. It all happened only days after he and his girlfriend had received their child back from CPS. 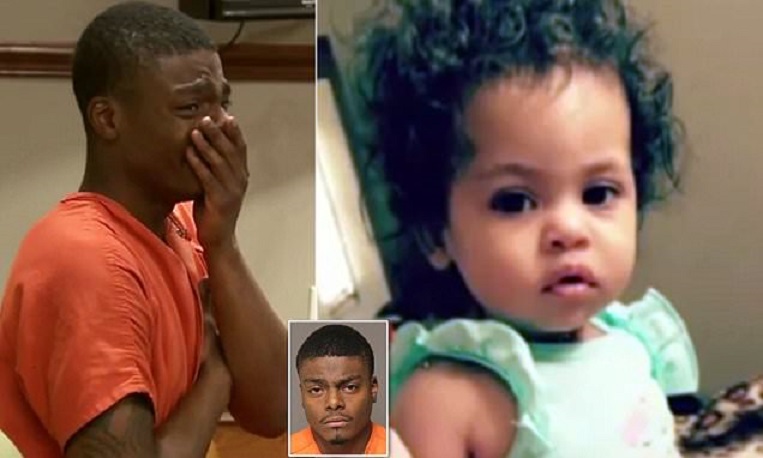 Saltmarshall was so distraught over his sick actions and where he found himself, that he was overcome and cried uncontrollably.

‘Wait, wait, this never happened, wait, wait a minute. Can I call my mom, can I please call my mom?’

Aisha Saltmarshall, the grandmother – and mother of the scumbag – said that her granddaughter’s death didn’t have to happen had local police and caseworkers actually listened to her pleas and permitted her to continue taking care of the baby.

The baby was found unresponsive after an emergency call came in.

She was rushed to a local hospital with a trauma to her head, as well as rectal tearing. she only made it three days before passing away.

According to the release, the baby’s mother headed to work on the morning of the incident and left her boyfriend, James Saltmarshall, alone with the child. She was in perfect health when she left.

Speaking to the Detroit news station, Aisha Saltmarshall said she was caring for the child at the time Child Protective Services caseworkers and forced her to give the baby to her son and his girlfriend, despite the grandmother’s objections that she would be in danger if she gave her up.

This grandmother was so upset that she called every county agency, warning them that her granddaughter was in danger, but she said not a single person would listen to her.

So, who’s head from CPS is going on the chopping block? No one’s. They are untouchable and yet this grandmother is now out of her mind with grief because not a single reasonable excuse she gave was good enough to save that baby girl from this sick bastard.

In John Hawkins’ new book, ‘101 Things All Young Adults Should Know’[3], he teaches in chapter 10, “People are what they are and probably are not going to change much once they reach adulthood.” Saltmarshall may have always been a degenerate scumbag. The worst. The grandmother knew this and did everything she could to protect the child.