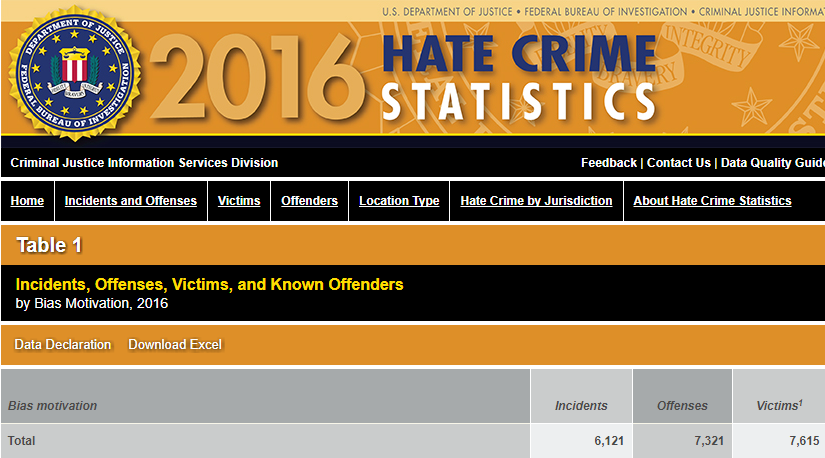 Wasn’t the Obama era supposed to be a time of racial healing?

A new report from the FBI is now indicating that race-based crimes are still on the rise and right now the fastest growing type of racially-motivated crime is against white Americans.

As well, the total number of all hate crimes has risen since 2015. And it wasn’t just anti-white hate crimes that are on the rise, because from 2015 to 2016 the number of anti-Hispanic and anti-Latino hate crimes rose 18% from 379 to 449. Anti-black hate crimes dropped by three offences, but they are still the most prevalent form of hate crime as recorded by the FBI.

The least-affected group appears to be the peaceful, kindly Buddhists, who suffered only one incident and one victim of an anti-Buddhist hate crime.

According to the FBI, a victim can refer to an individual, a business, a government entity, a religious organization or to society as a whole. The FBI says hate crimes as the “highest priority of [their] Civil Rights program,” because hatred-preaching groups can “plant the seed of terrorism here in our country.” They define the term as something similar to a “traditional offense like murder,” but with an “added element of bias,” where they collect their statistics by calling it a hate crime if it is an offense that is motivated “in whole or in part by an offender’s bias against a race, religion, etc.” They do say that hate itself is not a crime because under the First Amendment, you’re allowed to be hateful. Just try to keep it at home.

Earlier today we posted a video of Tucker Carlson grappling with a race-baiting professor[2] who had just published an article in the New York Times asking if it was okay for his (black) children to be friends with white people.

A few months ago, Steve Bannon of Breitbart News tried to coin a new phrase, “Economic Hate Crime,[3]” to describe what he believes the left wing pushes upon blue collar American citizens. Specifically, the anti-industrial push that puts many Americans out of work. Breitbart was until recently funded by billionaire Robert Mercer who has publicly split with the company, saying that he will be selling his shares to his daughter Rebekah.