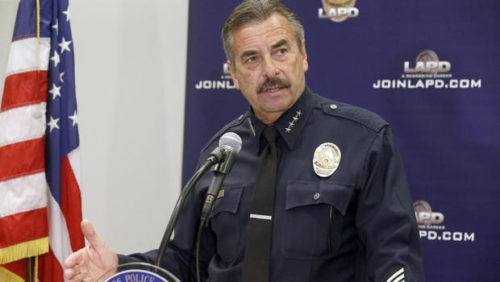 A suspected killer[2] got into a gun battle with LA police and ended up shooting a SWAT officer before being taken down with return gunfire. The kicker? He livestreamed the incident on Facebook.

The unnamed suspect began broadcasting live on Facebook while shouting, “they about to kill me. Mama I love you. My kids, I love you,” he said only moments before being hit with bullets.

Well, they got him, it’s true. But he’s still alive. Although he had multiple gunshot wounds, emergency surgery saved his life. The SWAT officer, who was shot by the suspect, is also expected to survive.

The fleeing suspect, along with three other suspects, was wanted for a March 31 gang-related homicide.

Police were in the process of attempting to bring him in when the chase started in El Segundo. It ended with the livestreamed gun fight.

The Twitterverse erupted with comments, ranging from disbelief that the thug was stupid enough to film himself committing a crime, to those that remarked upon how this livestream simply proves that these criminals are not the innocent boys their families always claim them to be.

Facebook Live streaming is making it harder for relatives of violent criminals to claim how sweet and harmless they are.

This younger generation just loves to incriminate themselves as long as they get those likes, views and retweets.

The LA police have the video, which was pulled from Facebook and is no longer able to be viewed. This homicide suspect will be arrested and charged with investigation of attempt to kill a police officer.

This thug told his mother and kids that he loved them as he attempted to commit suicide by cop. That’s not love, it’s selfishness.

A representative of the Los Angeles Police Protective League, the police officer’s union, said in a statement that this brutal incident is a “somber reminder that police work is inherently dangerous and deadly.”

See video of story below.