This is a much needed bill[1] and Cotton and DeSantis are exactly right. In any other ‘sane’ time in history, Barack Obama would have been tried for treason for his actions against the national security of the United States. Obama is intent on releasing everyone in Gitmo and shutting its doors once and for all. Since he couldn’t force America to take them into our legal system, he’s now just sending them to whoever will take them. 1/6 of them have returned to the battlefield – including one of the Taliban Five swapped for the traitor Bowe Bergdahl. I hope this legislation passes and quickly. 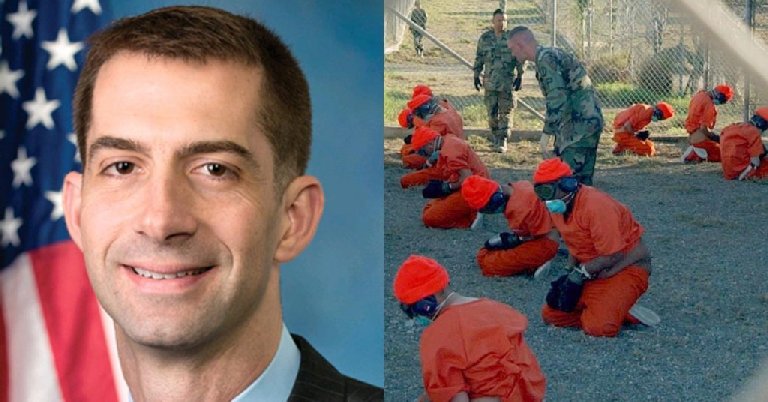 President Barack Obama keeps releasing prisoners from Gitmo[2], and these prisoners keep returning to the battlefield.

Republican Sen. Tom Cotton and Rep. Ron DeSantis want to stop this from occurring, so they introduced legislation this week that would halt foreign aid[3] to countries that accept Gitmo prisoners if said prisoners return to the battlefield.

DeSantis told reporters that the bill would serve as “a disincentive for (countries) to accept these people unless they’re really sure that these folks aren’t going to be a problem.”

Cotton added, “Congressman DeSantis and I are committed to ensuring Congress does everything in its power to stop recidivism.”

According to a new report by the Director of National Intelligence, 116 out of 647 released Gitmo prisoners “have been confirmed as having re-engaged in terrorism.” Included among these prisoners are one of the five Taliban commanders[4] Obama traded for the return of traitor Bowe Bergdahl.

Since stopping Obama from using his executive power[5] to release more Gitmo prisoners is apparently not possible, the goal, contended Rep. Ron DeSantis, is to hold “detainee-receiving nations accountable.”

This is necessary because the president is expected to keep releasing more prisoners to foreign countries. A law blocks him from releasing them into the United States prison system, so he has been releasing them to countries like Qatar, Afghanistan, Uruguay, Saudi Arabia, Great Britain and Yemen.

“Since he can’t bring them to the United States, he wants to close Gitmo so bad that he’s willing to just release them all,” DeSantis remarked (H/T Newsmax[6]).

The problem is that most of these prisoners wind up being “harmful to our national security,” which is why Cotton and DeSantis are trying to do everything in their power to stop Obama from releasing any more of these terrorists.

Any country who takes one of these dirt bags better be damned sure they don’t return to the battlefield. Or the US will could off their funding. In all honesty, we should cut them all off in the Middle East any way, but this makes a very good point. It’s a sad turn of events when America can’t reign our own president in and we have to resort to cutting the purse strings to our enemies. When will America say enough and bring Obama and his cohorts to justice? He’s destroying our country and enabling every enemy we have to take us down. Closing Gitmo is just one more brick in that wall.