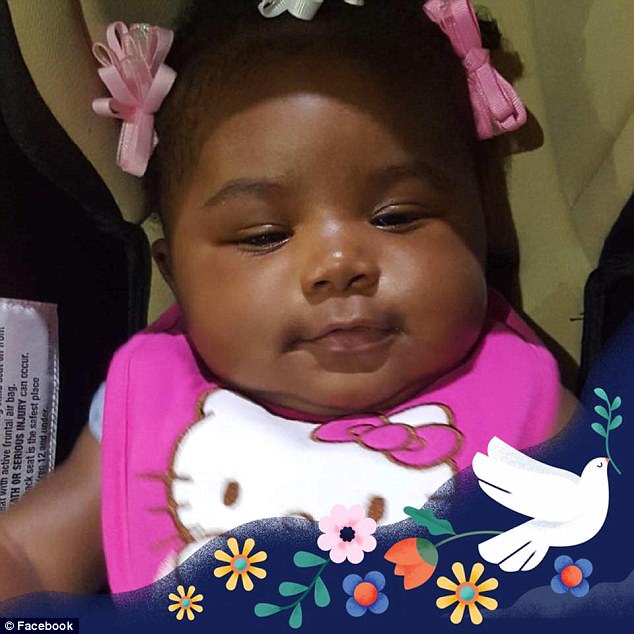 When the Hurricane hit, Dekari, 22, was apparently stressed, because the hurricane had knocked out power to the abandoned home he was “seeking shelter” in. The lack of air conditioning caused Dekari to be “highly stressed” and he allegedly struck his six month-old baby girl in the head twice because she would not stop crying. When the girl’s mother found that her daughter was unconscious and not breathing, she called 911. Suffering from a fractured skull from being hit, the paramedics who arrived on the scene were unable to revive the baby through CPR.

They rushed the baby to the nearby Arnold Palmer Hospital and put her on life support. The hospital’s record shows that the baby had suffered bleeding in her brain and confirmed that her skull was fractured in several places. Due to a depression in her skull, the doctors were led to believe that the fractures were caused by being hit. By the next morning, Kali was pronounced dead.

The home in which Dekari, his wife and baby Kali were squatting in during the aftermath of Hurricane Irma.

When Dekari was first questioned by detectives, he claimed that the skull fractures happened when he dropped his baby girl, but they were suspicious, because of the history of alleged abuse against his wife and children. Florida officials had already paid a visit to Dekari, who was investigated when his infant son was brought to a hospital with a broken femur. The boy was only four weeks old at the time and he told the hospital that he had “squirmed out of his grasp and fell” and that he had managed to catch the baby by his leg, explaining the injury. At that time, doctors who performed the examination reported that the femur was likely broken by a “violent blow,” not an accidental drop. Due to the lack of evidence, prosecutors did not pursue charges.

With the suspicion that Kali’s death was caused by her abusive father, the girl’s mother told investigators that Dekari had recently slapped her in the face when she was unable to open a window a few weeks ago and that she found her baby unconscious two hours after that incident.

After three interviews, Dekari finally admitted that he was “highly stressed” from both the baby’s crying and from not having power, so he hit her twice, until she was quiet. He then called the girl’s mother several times and told her to come instead of calling 911. He currently faces first-degree murder and child abuse charges.

So far, Hurricane Irma has been blamed for several deaths andpet owners who left their animals behind may face felony charges[3].