What happens when you get robbed around Christmas and have very clear pictures of the man who decided to pull a Grinch move on your family? Well, of course you incorporate them into your lawn decorations!

Ken Lamkin found that his inflatable Christmas decorations had been stolen right from his yard. Watching the footage from his cameras, he was struck by how slowly and methodically the man acted during the heist. In fact, it reminded him of the Grinch Who Stole Christmas. 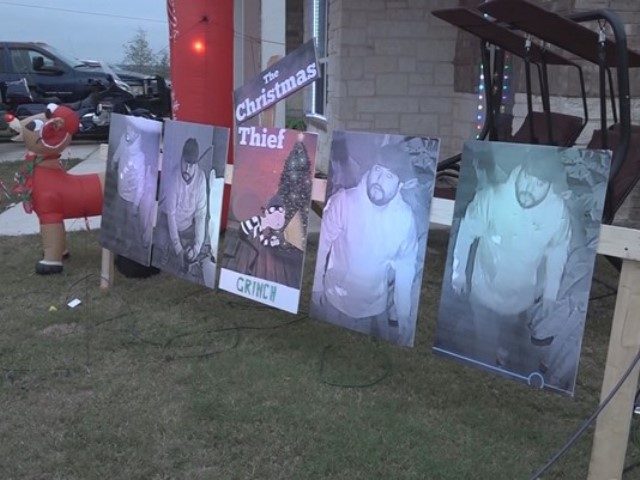 “He was so slow and methodical, that’s what reminded us of the story of the Grinch,” he explained to local media.

He decided to prove that this man couldn’t ruin his holidays, while alerting the neighbors to the fact that there is a man in the area who is running around stealing lawn decor. To that end, he blew up screengrabs of the thief and hung them printed on large boards. He then mounted them on a long board and posted it in his yard with a photo of a cartoon thief in the middle, branding the man “The Christmas Thief” and “Grinch.”

“It doesn’t only show that we know who you are, but it is also to show that you can’t take our Christmas,” Lamkin said. “We are going to sit down here and hold hands, and we are going to sing and enjoy Christmas.” Sounds reminiscent of the Whos in Whovillle, doesn’t it?

He pulled out one more Grinch reference before the interview ended, which makes me strangely happy.

“Maybe your heart can grow 10 sizes today-and you can go around and return the stuff you took.” he suggested.

While I don’t think that’s going to happen, this is certainly a creative way to put a criminal on blast. In fact, I would like to suggest that we do this with every thief. Maybe put their faces on milk cartons the way we used to do with missing children. “Have You Seen Me? 30 year-old male, Caucasian, 6’3″, last seen in the home of the Jones’ while stealing their priceless silver.”

In all seriousness, this is certainly not the time of year to be stealing things. I hope this man’s conscience does get the better of him and he has a change of heart. He may start out the New Year in prison, but he’ll be better for it. If that isn’t going to happen, perhaps he has a decent friend who knows right from wrong.