More and more of these videos are popping up with edgy cops shooting dogs[1]. Time and time again, they turn out to be cops with itchy trigger fingers who aren’t good with animals. Granted, shooting a dog isn’t the same thing as shooting a human being, but being too quick to fire should be treated as a career killer, not just a minor mistake. 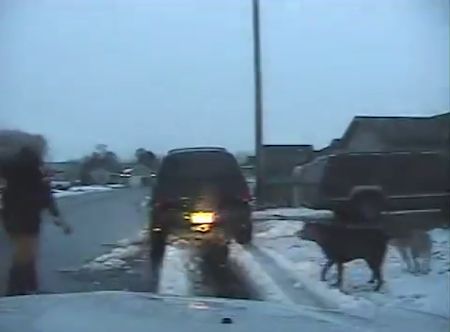 As a 9-year-old boy’s birthday party was winding down at an Idaho home on Saturday, a police officer fatally shot a service dog belonging to the boy’s father.

At around 5:30 p.m., the officer was responded to complaints of dogs on the loose, which is what he found when he arrived.

Officer Tarek Hassani, of the Filer Police Department, is seen on footage captured by his vehicle’s dashcam kicking and yelling at the barking dogs as he attempted to make his way to the front door. When one of the dogs attempted to move around him, the officer shot the 7-year-old black labrador, named “Hooch,” at point-blank range.

While the police claim the dog was overly aggressive and needed to be put down, the dog’s owner, Rick Clubb, is alleging that the officer was far too trigger happy. Clubb told the Times-News that Hooch was his trained service animal as he suffers from Parkinson’s disease.

“He didn’t have to pull out his .45 and shoot my dog,” he said, also expressing concern that the shooting occurred right outside his son’s bedroom window.

Watch the video below, but we warned the content is extremely graphic and disturbing

The owner was not blameles in this incident. He has three dogs running around and the one in question wasn’t exactly friendly. On the other hand, the punishment didn’t fit the crime either. Walking into someone’s yard and blowing their dog away because it’s not turning over on its belly should be treated as a criminal act, even if it’s done by an officer. The cop in question should be fired, prosecuted, sent to jail and sued civilly for what he did and I can guarantee you, if I were on the jury, you could count on one guilty vote before it even got started.