Horror in the Skies Over Egypt: ISIS Claims It Brought Down Russian Plane with 224 Aboard [Video]

In the skies over Egypt yesterday[1], the unthinkable happened. A Russian plane exploded and broke in two. It plummeted to the ground killing all 224 on board, including 17 children. ISIS couldn’t wait to take credit for the tragedy. And although Russia and Egypt are claiming that this wasn’t terrorism, that is beginning to fall apart. The pilot, who was said to have made a distress call just before the plane came apart, did no such thing according to personnel on the ground. A three year-old’s body was found five miles away from the crash site. That plane exploded in mid-air, coming apart as it did so. ISIS videoed the attack and included a bogus pic of the wrong plane. But, if they could not have physically gotten to the site, that’s exactly what they would have done. Yesterday, not long after the explosion, I heard from numerous intel sources that there was at least one bomb and probably more than that on the plane. I think ISIS could very well have taken that plane down regardless of what is being claimed. 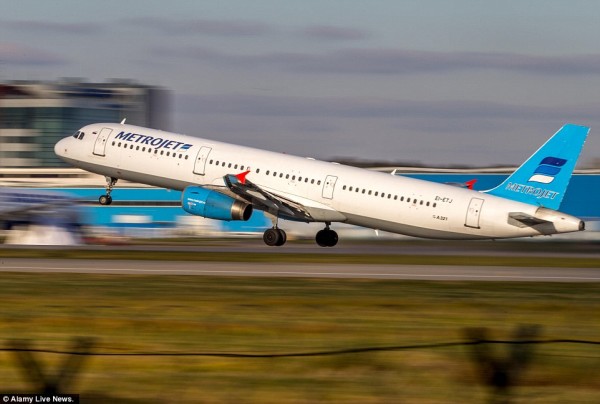 ISIS has released a video purporting to show the final moments of the Russian jet that crashed in Egypt, killing all 224 people on board.

The terror group has claimed it downed the aircraft, but has not said how it might have done so. The horrific footage – which was posted online and cannot be verified by MailOnline – shows a large structure resembling a plane falling through the air, before being consumed by a mass of smoke.

Cairo and Moscow have denied any possible terrorism link in the incident, which was one of the deadliest Airbus crashes in the past decade.

However, it has emerged that the aircraft broke up mid-air scattering debris and bodies over a wide area. This morning, Egyptian authorities recovered the body of a three-year-old girl some five miles from the crash scene.

So far, only 163 bodies of the 224 people on board have been recovered. As a result, authorities are expanding the search perimeter to nine miles.

An Egyptian security official said: ‘We found a three-year-old girl eight kilometres from the scene.’ He said many of the bodies are missing limbs.

It comes as it has emerged that the burning Airbus A321 did not lodge an SOS call before it plummeted to he ground in the restive Sinai Peninsula.

Professor Michael Clarke, Director General of the Royal United Services Institute said early indications suggest that the jet may have been destroyed by a bomb on the aircraft.

He told BBC Radio Five Live: ‘This aircraft was 200km north of its take-off zone, that means it was flying at around 31,000 feet. Terrorists, as far as we know, don’t have equipment to take down an aircraft at that height.

‘They have shoulder-launched missiles, known as man-portable missiles. They can get aircraft when they are taking off or landing, when they are going low and slow. But anything above 8,000 or 9,000 feet is out of the range of the weapons that they’ve got.’

He said the area where the jet crashed is a known location for groups affiliated to Al Qaeda and ISIS, but it was highly unlikely that a ground-based weapon was responsible for the in-flight break up.

‘Early reports said it split into two and that suggests a catastrophic failure, not a mechanical failure, but perhaps an explosion on board, so I would be much more inclined to think, if we have to guess at this stage, it is much more likely to have been a bomb on board than a missile fired from the ground.

‘And there’s no sign of a distress call, so the idea that the aircraft was undergoing an mechanical problem, or an engine problem, or a fire, or something like that, you would expect that there would be some sort of distress call beforehand.

‘So the fact that there was a catastrophic failure at 31,000 feet, with the aircraft falling in two pieces, suggests to me an explosion on board. So was this caused by some form of terrible accident, which is unlikely, or a bomb, which is much more likely, my mind is moving in that direction rather than anything that happened on the ground.’

Egypt’s civil aviation minister Hossam Kamal said communications between the pilot and air traffic controllers were ‘normal’ ahead of the disaster.

‘There was nothing abnormal… and the pilot didn’t ask to change the plane’s route,’ he said, adding that the controllers recorded no distress calls.

His comments contradicted earlier claims that the pilot had reported technical difficulties and made clear his intention to land at the nearest airport.

Family and friends were yesterday pictured grieving for their loved ones – as harrowing images of the plane’s mangled wreckage were released.

The photos were distributed by the office of Egyptian Prime Minister Sharif Ismail, who visited the crash site following the devastating crash.

They show the destroyed interior of the Irish-owned aircraft, which split apart upon impact, killing 192 adults, 25 children and seven crew members.

Yesterday afternoon, officials said they had recovered the aircraft’s black box, which is now being examined to determine the cause of the crash.

Last night, the prime minister’s office said: ‘The black box was recovered from the tail of the plane and has been sent to be analysed by experts.’

It added that more than 45 ambulances have been dispatched to the crash site, with rescuers having recovered 129 victims’ bodies so far.

The jet, which was leased by a Russian airline and carrying package holiday passengers back to St Peterburg in northern Russia, plummeted to the ground less than 25 minutes after it took off from the Red Sea resort of Sharm el-Sheik. It crashed in the Hassana area, south of Arish, officials said.

Its passengers included a 10-month-old baby girl flying home with her parents, as well as two siblings aged two and three. Numerous other children aged under 11 also perished in the disaster, according to a manifest of passengers published by the Association of Tour Operators of Russia.

The victims’ bodies were spread over a three-mile radius, according to reports.

Security forces discovered the plane wreckage in a remote mountainous area in a region containing many ISIS-affiliated terrorists.

Ismail told reporters that experts will ‘start examining the information in the plane’s black box, and based on this we will study the causes of the crash’.

He also expressed scepticism about ISIS’s claim that it carried out the attack in response to Russian strikes in Syria.

The ISIS statement read: ‘The soldiers of the caliphate succeeded in bringing down a Russian plane in Sinai.’

It was revealed late yesterday that many of the bodies were missing limbs. That sounds more like a bomb type of side effect, than a crash. You would expect bodies to be obliterated hitting the ground like that, but not for their limbs to be ripped off and missing. The aircraft was far too high for a shoulder-fired missile to have done this. Their effective range is 8,000 to 10,000 feet. The plane was flying between 31,000 and 36,000 feet. After it exploded, it dove into the ground at more than 6,000 feet per minute. Egypt’s civil aviation minister Hossam Kamal said communications between the pilot and air traffic controllers were ‘normal’ ahead of the disaster. ‘There was nothing abnormal… and the pilot didn’t ask to change the plane’s route,’ he said, adding that the controllers recorded no distress calls. Pilots have been quietly told to be more cautious about their altitude amid concerns of a terror attack. A statement from an ISIS-linked group being broadcast on jihadist propaganda channels said: ‘A Russian plane was dropped with the destruction of more than 220 Russian Crusaders, thankfully.’ The group known as A3’Maq News used the headline: ‘fighters of the Islamic State down a Russian passenger plane in the sky over the Egyptian Sinai.’ It quoted a source as saying: ‘This operation came in response to raids by Russian planes that have caused the deaths of hundreds of Muslims on Syrian territory, most of them women and children.’ The Russians wasted no time in getting to Egypt over this. I don’t believe the officials that are blaming the plane and personnel, which I find very convenient. This looks like a terrorist attack to me. All those poor people who died because of hate – the 10 month-old baby who perished is the one I can’t get out of my mind and never will. The war is on and people are still in denial – not for long though. 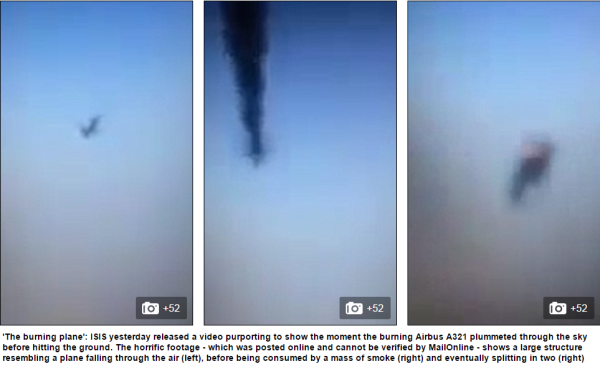 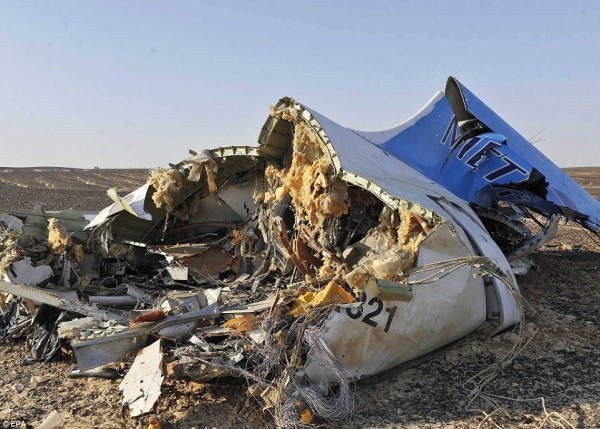 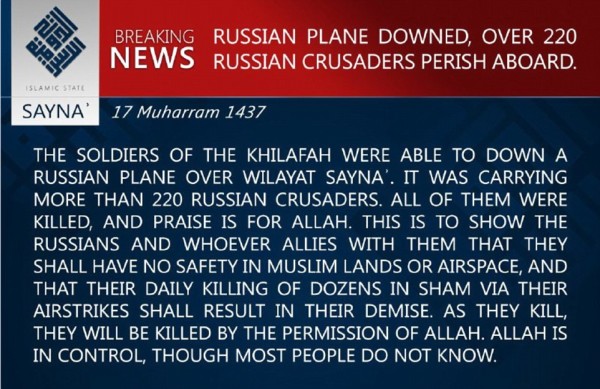 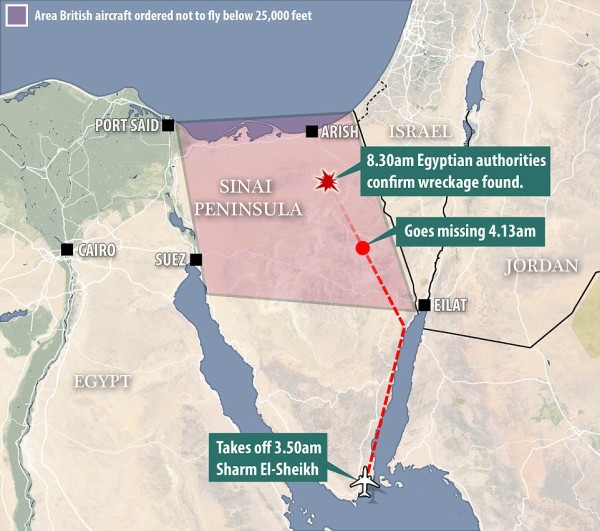 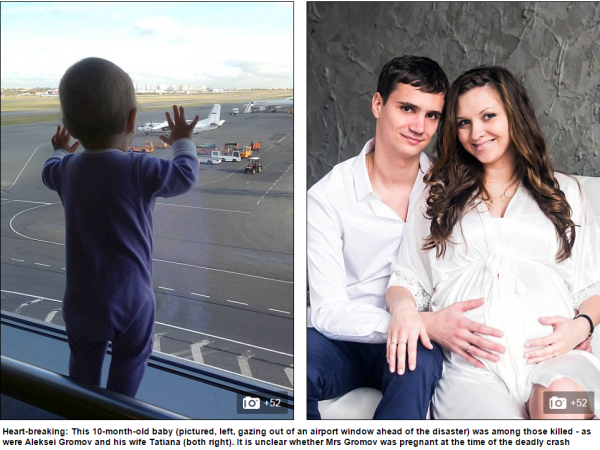