Part of a press conference briefing with Las Vegas Sheriff Joe Lombardo has surfaced that has a hot mic portion on it. You have to listen to it very carefully. In it, a reporter is asking about a staged car that the shooter, Paddock, had intended to use to get away. Someone seems to whisper to the Sheriff, “Don’t go there.” The Sheriff replies that he doesn’t make assumptions. Now, I know that everyone is jumping on this as if it indicates some kind of nefarious plot by the LVPD. I don’t think so. That response was not out of line and exactly what you would expect from the sheriff. There are a lot of unexplained hinky things with this whole investigation, but to me that’s not one of them. Decide for yourselves.

It is sure to feed conspiracy theorists though and for that, the blame does lie with the police. They should have nailed down the timeline and gone public with it long ago. It also doesn’t help that the security guard, Campos, is now missing. He was set to do a whole bunch of interviews last Thursday, including Sean Hannity, and canceled out of the blue. He was at a meeting with his union rep at the Mandalay Bay and somehow disappeared. The rep was told he went to a clinic. No clinic in Vegas ever admitted Jesus Campos. There is a security van outside his home with a dishtowel over the license plate. My bet is he’s holed up somewhere because the Mandalay Bay wants him to lie low as this is sorted out. But who knows. 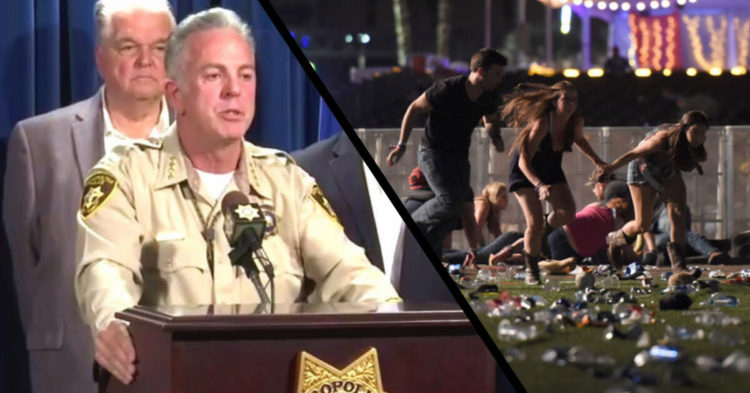 The whole case is baffling. Paddock looks all the world to me as if he was laundering money gambling and running guns and possibly drugs. I lived in Vegas for 20 years and I dealt with the casinos on a regular basis. In fact, I worked on the MGM fire case. This event has people baffled and scared and you can certainly understand why. No motive has been revealed and everything has been hushed up. That’s a mistake. Especially in the public eye the way this is being seen. It has been weeks and you would expect that we would have a fair idea of what exactly happened that night. But we don’t. And with each passing day, things just keep getting stranger.

There are still reports of multiple shooters floating around. Personally, I don’t buy that, but then again, I have no way of knowing. The timeline of events has changed several times. That’s not good and doesn’t even really make sense. Anyone living in Vegas knows that there are cameras all over these hotels. Most of the good ones are trained on gaming, but there are cameras in the hallways as well. The authorities keep contradicting themselves and people are not in a trusting mood these days.

I don’t know Sheriff Lombardo. I’ve been gone too long from Vegas, but he seems like a good man. However, I’ve noticed he’s becoming more and more defensive, which is never good for a law enforcement officer or any leader for that matter. Chastising reporters and people wanting the truth doesn’t buy you anything and engenders distrust. We already knew from investigators that Paddock had planned to survive the attack and get away. He had a plan to do just that. So, the defensiveness there doesn’t make much sense, unless you consider they are still gathering facts and don’t want to discuss that facet of the investigation yet because of that.

I would caution everyone though not to jump at all these conspiracies. It doesn’t buy you a thing. We all know there is more to this than we are seeing, but you need to view the facts and go from there. Hot mic moments can be very deceiving. The authorities owe the public the truth here as soon as they can release it. Eventually, the truth will come out on all this.