“If I Could Change Places With Him, I Would,” Says Grieving Partner Of K-9 Hero

“Jethro,” a K-9 officer with the Canton, Ohio police department, was killed in a shooting with a suspect early Saturday morning. He was shot three times – in the face, shoulder and neck – and died at the scene. 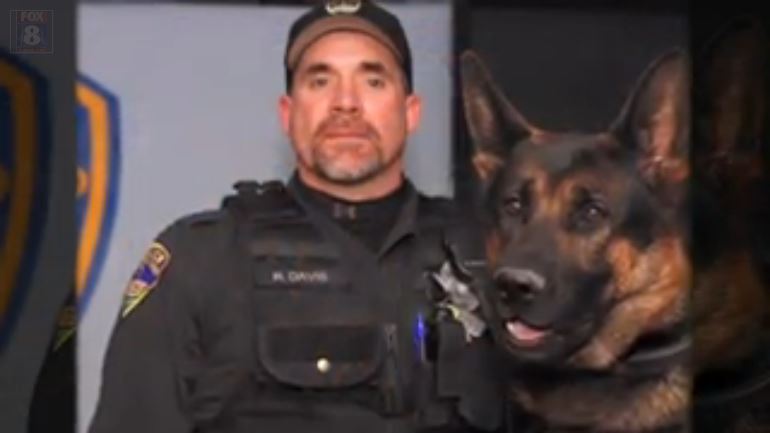 “I still call his name,” Davis said, in an emotional interview with Fox 8 Tuesday afternoon.

Jethro died Sunday. He was shot three times by a suspect during a shootout early Saturday morning[3].

“There is no doubt in my mind that I am here because of what he did, “ said Davis.

The suspect in the shooting was shot in the leg and is recovering in a hospital. Once he is released he will face several charges, including shooting a police dog, and felonious assault. Davis, who served in the Marines, and has been on the force 19 years, says Saturday was one of the worst days of his life.

He stayed by Jethro’s side, as the German Shepherd fought for his life. “He was a fighter,” said Davis, who got Jethro when he was just 8 weeks old. A memorial service will be held Thursday at noon at the Canton Civic Center.

The suspect in the case is 22-year old Kelonte Demorious Barefield. He’s in the hospital, but a judge has set a $5 million bond for him and he’s charged with aggravated burglary, assaulting or harassing a police dog, felonious assault on a peace officer, having weapons under disability and shooting on or near a prohibited area. If you expect they’re going to throw the book at this slimeball, you wouldn’t be wrong.