Illegal Immigrant Who Slaughtered Her Husband And 4 Children, Is ALL Smiles In Court [VIDEO]

A 33 year-old illegal immigrant woman[1], named Maria Isabel Garduno-Martinez, tried to kill her entire family in Georgia this week. She succeeded in stabbing to death five of the six members in her trailer home. She killed her husband, a daughter and four sons… ages 2, 4, 7 and 10. Another 9 year-old daughter was stabbed, but will survive the attack. Obviously, this woman is murderously insane. And she proved it even further in court when she gave the judge a thumb’s up and smiled for the cameras. Absolutely no remorse.

Evidently Maria had been[2] in her home with the bodies and the injured child for 24 hours or better. She called the police to report their deaths at 5 am on Thursday and then was arrested and charged. Police have now filed numerous murder charges against this nut. Before her hearing started, she stood with other inmates and posed for the cameras. She also put her hands in a prayer position and bowed for the media. Bizarre doesn’t begin to cover this woman. She’s also refusing legal representation. I’d say the odds are pretty good the judge will find her mentally incompetent. Pity… she deserves the needle for this. 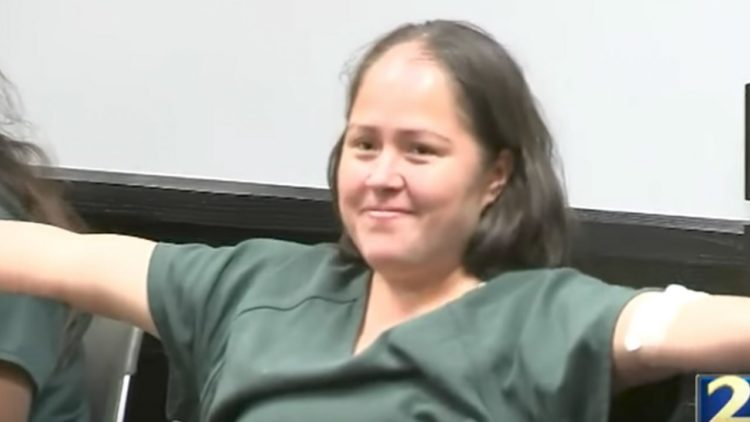 An illegal immigrant woman charged with killing her four children and her husband shocked onlookers in court when she gave television news cameras a thumbs up while smiling bizarrely.

33-year-old Maria Isabel Garduno-Martinez, who entered illegally into the United States from Mexico, was charged with stabbing [4]her children and husband to death early Thursday morning in their home near Atlanta, Georgia.

Garduno-Martinez called the police just before 5 a.m. to report the stabbings.

Neighbors said[5] that she must have been in the home with the deceased family members for as long as 24 hours.

Judge Thorpe read the charges that Maria is being charged with: five counts of malice murder, five counts of murder and six counts of aggravated assault. The woman shook her head “no” and wagged her finger at the Judge. He then admonished her to knock off the performing for the cameras. After turning down legal representation, she insanely added that her attorney will always be the people and her faith.

Garduno-Martinez is being held without bond. No surprise there. The little girl is in serious, but stable condition in the hospital. It was a miracle she survived the stabbing and then the 24 hours afterward before her mother was arrested. Authorities said Martinez has been cooperating with investigators but a motive for the crimes has yet to be released. The family moved there from Illinois about a month ago and Martinez’s dad had recently died. It is also being reported that Martinez has a long history of mental illness. And this is the tragic end to that.