A pregnant, 19 year-old illegal immigrant was convicted of felony grand larceny after she admitted she stole over $5,000 worth of jewelry from a Virginia home she had cleaned. But don’t worry, she felt really bad, or something, so the jury decided to pay her fine for her. 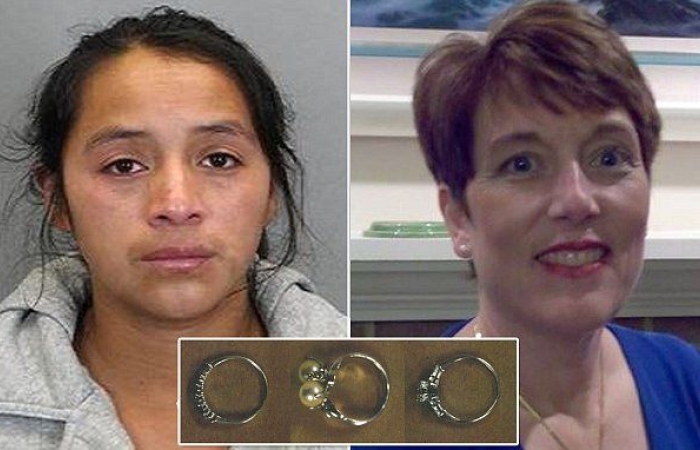 Her fine was $60, which is less than 1/5 of the fine I would get for running a red light in California. Priorities, am I right? Jury foreman Jeffery Memmott says the jury felt bad for the 19 year-old, so they pooled together $80 for her. Sandra Mendez Ortega, the illegal immigrant in question, is pregnant with her second child. Although the story seems compassionate, the victim of the theft is not happy about what happened.

“I just pray that they’re never in my shoes,” Lisa Copeland told the Washington Post. She also says Ortega didn’t admit what she did was wrong. “If she had accepted accountability, I would be okay with all of this. The fact that she won’t accept accountability makes it wrong.”

Copeland was also baffled by the $60 fine, which is probably about how much Ortega made in a day as a maid. She was also upset that Ortega made money off of the whole situation, coming out $20 in the black.

“I was outraged,” Copeland said. “I was just flabbergasted. I didn’t think $60 equated to the crime at all.”

One juror admitted that “justice had to be done.” Janice Woolridge, the juror in question, said, “there’s also got to be some compassion somewhere. Young people make bad decisions. We just couldn’t pile on any more.”

“The general sentiment was she was a victim, too,” Memmott said. “Two of the women [jurors] were crying because of how bad they felt. One lady pulled out a $20 bill, and just about everybody chipped in.”

A victim of what exactly? Lax immigration laws? I don’t see a problem for feeling bad for her and wanting to pay her fine. I get it, she is pretty young and we’ve all been there. And $60 isn’t much money. But there is another side of the equation here that gets unnoticed or outright swept under the rug. She is an illegal squatter on our lands, something that wasn’t discussed in the case because it wasn’t “relevant.”

Copeland says that Ortega’s immigration status was not told to the jury, claiming that she was told it wasn’t relevant to the trial.

“I think it’s relevant to the case,” Copeland said, adding that being a felony conviction means nothing for an illegal. They don’t have any of the rights that would be stripped of citizen felons, like owning a gun or voting (unless you believe illegals don’t vote[2]).

“It really irritates me that she came here and committed a felony,” said Jeff Copeland, her husband. “People are coming here because there is opportunity here. But when they come here and commit crimes, that’s where you’ve got to draw the line.”

That sounds like a reasonable position to me. If you’re here and commit a felony, sorry, you’re gone. I’m no open borders guy. As long as there is a welfare state, it is stupid to have this porous of a border where 50% of all immigrants, illegal or legal, use some kind of welfare program. That is unacceptable.