My inner feminist (classical, not third-wave) is screaming right now at the audacity of this man. An Indian mother got a part-time job making soap so that she’d be able to feed her two children and keep a roof over their heads, all because her husband, Roobab, refused to go to work as an autorickshaw driver.

In retaliation for this horribly offensive (and extremely common sense) move, Roobab threw acid at his bride, Zakira Ali Sheikh, leaving her horribly scarred and disfigured.

You know, what every man does when his wife is trying to keep their family off the streets. 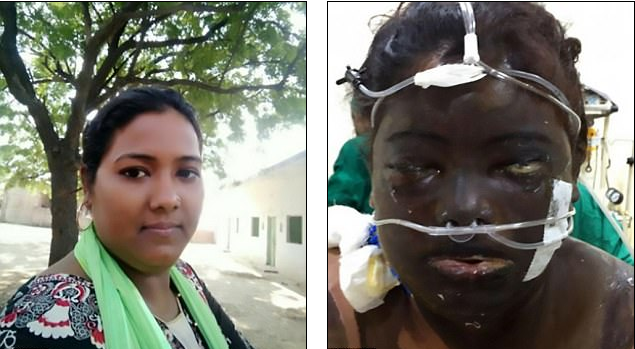 According to local media, Roobab went to the local police station and turned himself in for his crimes.

A fundraiser[2] has been set up to help the mother with her extensive medical expenses and in the biography, she details a marriage that was abusive, neglectful and something no woman or child should be forced to experience.

“Nothing turned out the way it was meant to,” she writes. “My husband hardly went to work and when he did, he would work for two to three hours and come back. Some nights, my daughters would have to go to bed hungry. The oppression of poverty made me depressed but I channeled this fear into strength and began to learn how to make soaps. I became an entrepreneur and would make soaps in Malwani, selling up to 300 soaps on some days. I was now the sole breadwinner.”

You would think this would make her lazy husband proud, now he could stay home and do whatever it was he does instead of working. But that wasn’t the case.

“I no longer depended on Roobab and my independence scared him,” she continues. “Having power of our finances was one way for him to control me and now, he couldn’t. Earlier, he used to deny me basic necessities as punishment and now, he depended on me for luxuries we never had. He became increasingly jealous, ordering me to stay home and accusing me of affairs I never had.”

And that’s when he decided that enough was enough.

“On November 3rd 2017, Roobab went out,” she notes. “Turns out, he had a sinister motive in doing so. My brother lived right next door and Roobab locked my brother’s main door from outside, making sure my brother would not be able to exit. He then returned home. I was sleeping next to our two young daughters when I felt a sudden movement above me. Just as I opened my eyes, a warm liquid poured all over me. I jumped to my feet and there stood Roobab, throwing more liquid at me. The first thing that hit me was the smell. This sour, pungent smell that has since not left the essence of my body.”

Her children were also harmed in the malicious attack, though not as severely as their mother, who is a 45% burn victim. If she’s lucky, she’ll only lose one eye and may not have to breathe through a tube in her neck for the rest of her life.

What punishment should her husband face for this horrid crime?