Someone broke in the glass[1] on the front door of an Indian store in Charlotte, NC with a rock and then tried to set fire to the market. They left a note saying that refugee business owners were not welcome there and that the owner would be tortured if he did not leave the US and go back to where he had come from. The letter was signed “White America.” If you immediately blamed Trump supporters, you’d be incredibly wrong. The suspect was caught on video… and he was black.

It’s a twofer for hate. Harm the local Indian business people and blame Caucasians for all of it. It may be that the guy just wanted to stir up trouble for white people who want refugees thoroughly vetted. It would be interesting to know if the guy himself is a refugee and if he is Muslim. Regardless of who is to blame, this will ratchet up tensions even more in that area. Authorities have rightfully labeled this crime a hate crime. 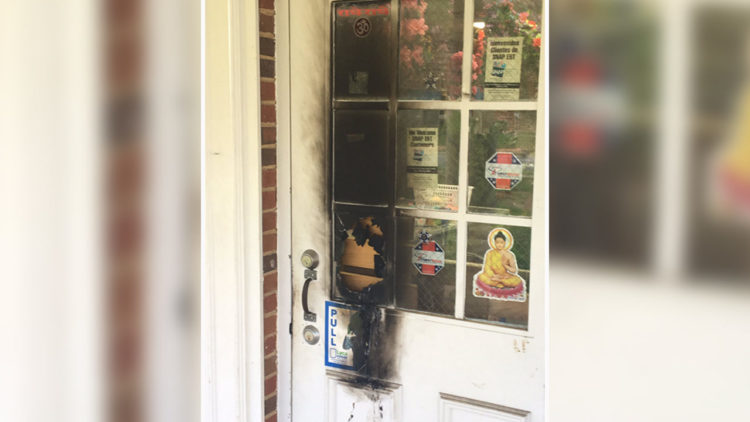 Two of the nation’s more vexing domestic problems — deteriorating race relations and immigration — appear to have provided dual motivation for a crime that police in Charlotte, N.C, are now investigating. CBS affiliate WBTV[3] has the details:

A man is wanted for setting fire to an Indian grocery store in east Charlotte Thursday night in what Charlotte-Mecklenbug police are calling a hate crime.

Police say fire was set to the Central Market[4], described as a Nepali Indian store, just before 10 p.m….

“A note was also left at the scene near the door that stated the suspect did not want any refugee business owners and that they would torture the owner if they did not leave and go back to where they came from,” CMPD said. “The suspect signed the letter ‘White America.’”

The store owner’s name[5] is Kamal Dhimal. He came from Bhutan, but is now a US citizen as of last year. He says he spent 20 years in refugee camps and does not intend to back down or go anywhere. He’s pretty shaken up over all this though. “Too many people have helped me, and I gotta be strong to continue doing business in this country,” Dhimal said.

The attacker[6] of his store was pictured in a photo that police are circulating. He’s a black man who is about 5’8″ tall and weighs about 200 pounds. He has a short afro and a goatee. He was wearing a black coat with a gray hoodie under it. He was also wearing light jeans and black shoes. Charlotte-Mecklenburg police said Friday that they’re working with federal authorities to investigate the hate crime. Detectives asked anyone with information in the case to call Crime Stoppers at 704-334-1600.

Detectives are asking for the public's assistance in identifying this suspect who is wanted for Arson at the Central Market business. pic.twitter.com/eKKq3yEjzW[7]

BREAKING- CMPD investigating after the owner of Central Market says someone left this racist note after a break-in last night @wsoctv[9] pic.twitter.com/CsDdBDPWkC[10]

The store owner tells me he is afraid but he won't let this keep him from running the market @wsoctv[9] pic.twitter.com/29gM9Q2XQ1[12]