INSANE! TV Reporter Is On Scene Of Bank Robbery… Then The Thief RETURNS A Second Time!

I hate that I laughed…

We can file this under Stupid Criminals, for certain. This guy’s so dumb he made himself famous on live TV[1]… 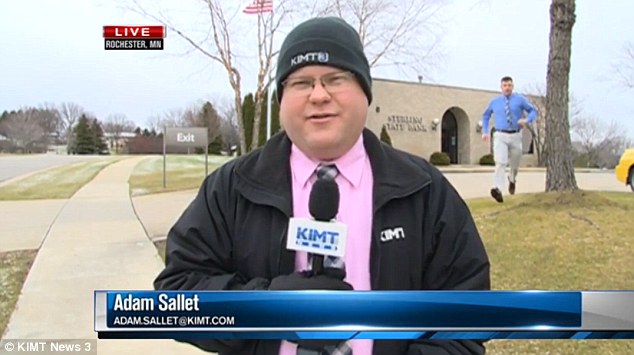 This is the extraordinary moment a reporter had to halt a live broadcast when a suspected robber allegedly returned to the scene of his crime to steal from a bank for the second time.

As the Iowa television station cut to Adam Sallet a bank employee ran out behind him and pointed to the suspect off camera.
Sallet broke away from his report by saying: ‘I have to go. I have to call 911.’

Moments earlier he informed viewers ‘This is live TV folks’ after hesitating briefly when approached by the bank employee and told the suspect had returned to rob the Minnesota bank again.

Unable to comprehend what he’d been told, Sallet replied: ‘What? Oh that’s the robber. That’s the robber that just went by according to the bank employee, so I’ve got to go here and call 911.

Maybe we ought to admire his dedication for wanting to return to the scene and get the job done right the second time.

Police Captain John Sherwin said the man is suspected of robbing the bank two days in a row.

In both robberies, the suspect presented a note and escaped with money.

Yes, the robber did get caught. Of course he got caught.