The name of the killer in the Denver massacre is James Holmes, a white male aged 24.

The name there is James Holmes and he lives in Denver. However, he graduated from high school in 2008, which would most likely make him 22 instead of 24. His profile also seems to be a mixture of Christianity/nerd hip — and he has a girlfriend listed. Additionally, nothing on the page seems to be angry, violent, or disturbing.

In other words, there’s nothing on the page that has dark, crazed, ready-to-snap vibe going on. Were I guessing, I’d say this IS NOT the page, but nothing else on Facebook in the area seems to fit well.

Update #1: I’ve already had a couple of people complain that this shouldn’t be linked if there’s no ironclad verification he’s the shooter. Setting aside the news value if this is him and that I’m clearly saying it may not be him in the post, keep in mind I’m not the only guy on the Internet who can do a Facebook search and within a couple of hours, there will be thousands of people posting this address all across the Internet. It’s already floating around on Twitter. Additionally, all the guy is going to have to do to show it isn’t him is update. The James Holmes who shot up that theater is locked down somewhere right now and he’s not going to be updating his Facebook page anytime soon.

Update #2: Here’s an interesting detail. “Federal officials have identified him as 24-year-old James Holmes. … that the suspect was driving a car with Tennessee license tags but had been living locally.”

There are a couple of James Holmes in Tennessee on Facebook also that are close. One even has a sniper rifle as his profile pic, but he looks to still be in high school. So, he’s probably too young. There’s another James Holmes covered with tattoos, but he looks a little too old, is married, and relatively recently still seems to be in Tennessee.

In other words, so far there don’t seem to be any really good fits.

Update #3*: Originally, there was a link in this post to a James Holmes Facebook page in Denver. Given the original information that was released, although it wasn’t a exact fit, it seemed like the most likely candidate if the shooter had a page (Of course, we don’t know for sure if the shooter had a Facebook page or not). However, since then we’ve learned the shooter’s car had Tennessee plates. There are a couple of James Holmes accounts in Tennessee that are just as good a fit as the Denver account, although none of them seem to be a perfect fit. So, since that’s the case, it doesn’t make sense to leave up a link to the James Holmes Facebook page in Denver anymore when there are at least two other accounts that seem just as plausible.

Update #4: The James Holmes from Denver has this up on his Facebook page.

Dearest random Facebook people who keep confusing me for a mass murderer and yet still send me Facebook requests.;

I appreciate the fact that you are trying to become better-informed about the occurrences last night in Aurora, but you have been somewhat mislead, in that I am not the man who did it. I am not a 24-year-old gun-slinging killer from Aurora, I am a 22-year-old book-slinging mass eater from Littleton. Somewhat distinct, I would assume. But I would appreciate if you would read this particular post an not assume that it would be interesting to be friends with someone on Facebook who is very probably going to be in jail and not be able to confirm your friend requests anyway, or even be friends with his girlfriend, who had the rather interesting experience of having to tell someone she had a job interview with that she is not, in fact dating a serial killer. James Holmes happens to be a pretty common name, surprisingly, so try not to jump the gun.

Update #5: As of yet, no one has discovered any social media pages run by the killer. No Facebook, no Myspace, no Twitter. Not even Pinterest. So it looks as if either he didn’t have any pages, deleted them to cover his tracks, or used an alias.

Update #6: Since a few people have asked, yes, I did send the James Holmes from Denver an apology via Facebook for being one of the people who linked his profile. I sent that to him yesterday morning, shortly after he posted in his account.

Update #7: Holmes may not have cared for Facebook or Twitter, but apparently he was looking to hook up before his mass murder because he gave Adult Friend Finder a twirl[1]. Disturbingly, his profile, which was created July 5 and was verified by the site, asks, “Will you visit me in prison?” 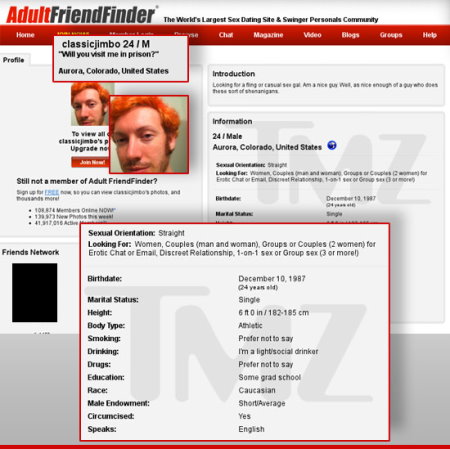