How could a person ever harm a child? It’s horrible to contemplate, but there are monsters out there who do it — like the lesbian lovers who murdered Liam Fee, a two year-old who was tortured his entire life. 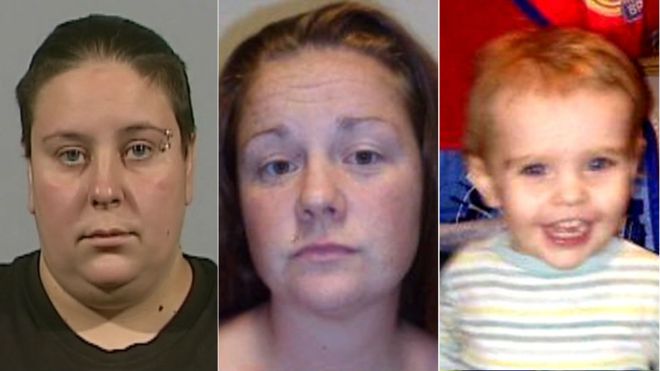 A pair of ‘cruel and pitiless’ lesbian killers who Googled ‘can wives be in prison together’ have been jailed for life today for battering two-year-old Liam Fee to death and trying to blame the murder on another boy.

Toddler Liam suffered more than 30 external injuries when he was beaten to death by his mother Rachel Fee, 31, and her partner Nyomi Fee, 29, at their home near Glenrothes, Fife, east Scotland.

The couple, who were convicted of the shocking murder following a seven-week trial, have now been sentenced to life in prison at the High Court in Edinburgh by a judge who condemned their ‘cruel and pitiless regime of ill-treatment and neglect’.

Receiving mandatory life sentences, Nyomi Fee was ordered to spend a minimum of 24 years in prison, while Liam’s mother Rachel was told she must serve behind bars for 23-and-a-half years.

They are currently being held in different prisons – one at HMP Cornton Vale in Stirling and another at an Edinburgh jail – and it is expected they will remain apart as co-accused defendants are usually not housed in the same prison.

The pair displayed little emotion as their sentences were delivered, one after the other, and there was silence in the packed courtroom as the pair were led away to the cells.

Liam’s father Joseph Johnson looked straight ahead as the women were told the punishment parts of their life sentences.

The court had heard how defenceless Liam died at his home in March 2014 having suffered ‘car crash-style injuries’ including a ruptured heart as a result of severe blunt force trauma to his body.

The trial heard how the two killers, originally from Ryton, Tyne and Wear, carried out two years of sustained attacks on the toddler and two other boys as social services repeatedly failed to act.

The pair’s depraved abuse included imprisoning one boy in a cage made from a fire guard, using cable ties to bind his hands behind his back.

They also tied another boy naked to a chair in a dark room with nine snakes and several rats, forcing him to eat his own vomit and telling him a boa constrictor ‘ate naughty little boys’. They also forced the youngsters to take cold showers when they wet the bed.

… In harrowing evidence, the jury heard Liam had suffered heart injuries similar to those found on road crash victims, with more than 30 external injuries on his body including blows to his chest and abdomen.

The court heard the pair knew Liam had a broken leg and fractured arm but instead of seeking help they searched the internet for terms including ‘how do you die of a broken hip?’ and ‘can wives be in prison together?’.

Jurors heard there had been an escalation of violence towards the blonde-haired, blue-eyed boy leading up to his death.

Their ‘callous indifference’ to his injuries would have left the child in agony, but the killers refused to get him medical aid, choosing instead to search the internet on their phones under terms such as ‘how long can you live with a broken bone?’.

Under oath, the women admitted serious failings over the lack of medical help sought for Liam and put it down to fears the child would be taken into care.

But they denied murder and, as part of their web of lies, tried to shift the blame for the killing on to a boy of only primary school age, who they claimed had been acting in a sexualised way towards Liam.

The boy was so scared of the women he initially told police and social workers that he had ‘strangled’ the toddler – but suffocation was not the cause of death.

The evidence pointed to a significant delay between the discovery by the women that Liam was dead and the emergency services being contacted by a seemingly hysterical Fee shortly before 8pm on the night in question.

The ‘panicking’ pair used the time instead to dismantle a makeshift cage they had built to imprison the youngster they falsely accused of killing Liam.

What’s insane is that they didn’t get life in prison. The idea that either of them could walk free one day is horrifying, to say the least.