Liberal Does UNTHINKABLE to Cop While Protesting the “March Against Sharia”

Saturday morning, an anti-Sharia demonstration was held in Philadelphia. The “March Against Sharia” was in full swing when a group of Antifa protesters showed up to hold their own counter-protest — but that protest quickly turned violent, with one of the Antifa thugs getting arrested after her despicable attack on police[1]. 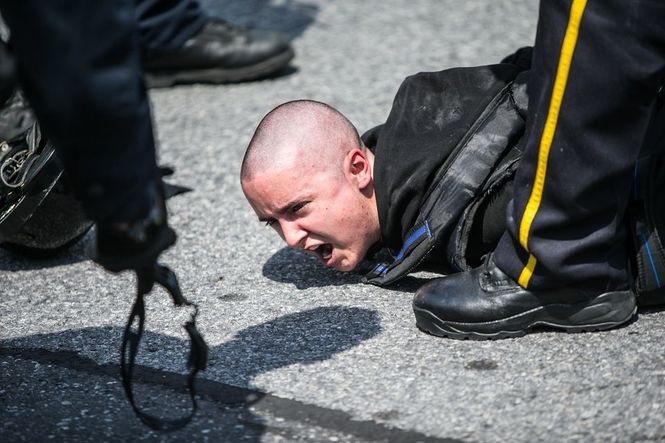 Simon allegedly attacked the horse, Sampson, who was with his partner, a Pennsylvania State Trooper there to provide crowd control for the march. Simon had placed a nail into one end of the flagpole, and attacked Sampson with it, striking him in the neck, hoping to get him to run and cause chaos among the crowd. Unfortunately, Sampson didn’t play along and continued to work, despite his injury. When that didn’t work, Simon moved on to obstructing police, attempting to prevent them from moving the crowd along.

For their part, the South Jersey ANTIFA denied any wrongdoing and has begun raising money for Simon’s legal fund:

But the police report makes it clear that Simon broke the law.

On 6/10/17 1132 hours, Harrisburg Police were assisting with the Act For America Rally on the Capital steps of N 3rd & State Streets. During this Rally part of the protestors moved from the capital steps north bound on N 3rd Street throughout the midtown area. Multiple mounted PSP Troopers and Harrisburg Police were assisting with moving a large crowd from blocking the 1200 BLK of N 6th Street towards the sidewalk.

A PSP Corporal and his partner, horse Sampson, were attempting to move the crowd when the defendant, Lisa Simon , used a flag pole with a silver nail at the top of the pole to strike horse Sampson in the side of the neck. Simon did this while obstructing the troopers from performing their duties to move the crowd onto the sidewalk.

Simon resisted Harrisburg Police officers from effecting a lawful arrest. Both the PSP Corporal and horse Sampson were able to continue working with minimal injury.

Simon’s preliminary hearing is scheduled for July 6th. What do you think her sentence should be if she is found guilty?