LIBERALS TAKE NOTE! This Is What Happens When Criminals Attempt Home Invasion On ARMED Owners

The manhunt for two fugitives who escaped their prison bus and murdered two corrections officers in Georgia came to a spectacular end in Tennessee. It was all made possible because an armed homeowner[1] helped police capture the killers. 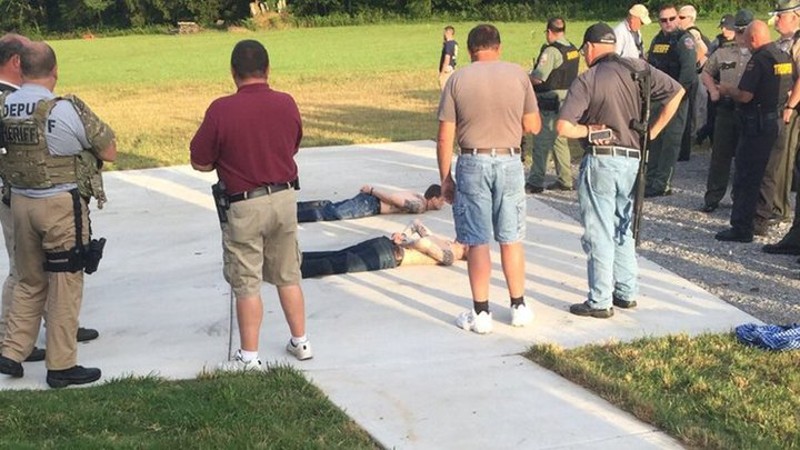 Ricky Dubose and Donnie Rowe had been on the run for three days after they took part in the killing Sgt. Chris Monica and Sgt. Curtis Billue.

According to law enforcement officials, the fugitives abandoned a truck they had stolen after it had been made known to them that the authorities had identified it to the public on Wednesday. Stealing another car, they home invaded an elderly couple’s house and held them hostage for three hours. Eventually the couple’s car was stolen by the two criminals and eventually the old couple were able to get loose from their bonds and call the police.

The killers were spotted in the car by police in Shelbyville, Tennessee, and the chase was on.

“All of a sudden, I look up from my phone and I see a state trooper. He’s got an assault rifle, he’s got his finger on the trigger and he’s like, ‘As soon as I tell you, turn around and go the opposite way on the highway.’”

The murderers shot at the police with weapons they had obtained, as they tried to speed away, but at length they crashed the stolen car into the woods and booked it towards a nearby home.

Fortunately, that home they ran to housed an armed homeowner and after calling the police and his neighbors, they were able to keep the killers prone, face down on the driveway until police arrived and arrested them.

Our Agent snapped this picture of Ricky Dubose and Donnie Rowe just after their capture in Rutherford County, TN tonight. Great work by all! pic.twitter.com/p2Y30ol9Ut[3]

Georgia Gov. Nathan Deal sent out a statement upon the recapture, complimenting the efforts of the officers involved.

“Rest assured, justice will be served. My sincere thanks to our local, state and federal law enforcement officers who assisted in the manhunt. Because of their tireless efforts, the public is safe. The pain endured by the families and loved ones of Sergeant Christopher Monica and Sergeant Curtis Billue endures, however. We will do everything in our power to support their loved ones, and we will not forget their sacrifice and service.”

Did the mayor conveniently forget to thank the armed citizen? Hmm.