Well, I might smile at this[1], but I’m not really laughing. When I was younger, I wasn’t wealthy… but I traveled all over the place and have fantastic memories of doing so. I guess it was a different world then in the 80’s. The offspring of the rich and famous were offered on Instagram an incredible music festival in the Bahamas on a private island, with tickets going for as much as $12,000. It was supposed to be two weekends of glitz, glamour and play. What it turned out to be was the hunger games for the young and wealthy. Bummer.

When people started arriving, the glamorous cuisine was ham sandwiches and salad served out of tents. Luggage was dumped out of cargo containers in the middle of the night. Belongings were stolen all over the place. One woman, who paid $10,000 for a VIP ticket, reportedly left her belongings in a half-erected tent, only to have them stolen minutes later. “One guy got punched out by security and they took his wallet,” claimed one festival-goer on Reddit, while others claimed that local residents on the island have been assaulting Fyre Festival attendees. No reports of rapes yet, but we haven’t heard everything that’s happened at this event. 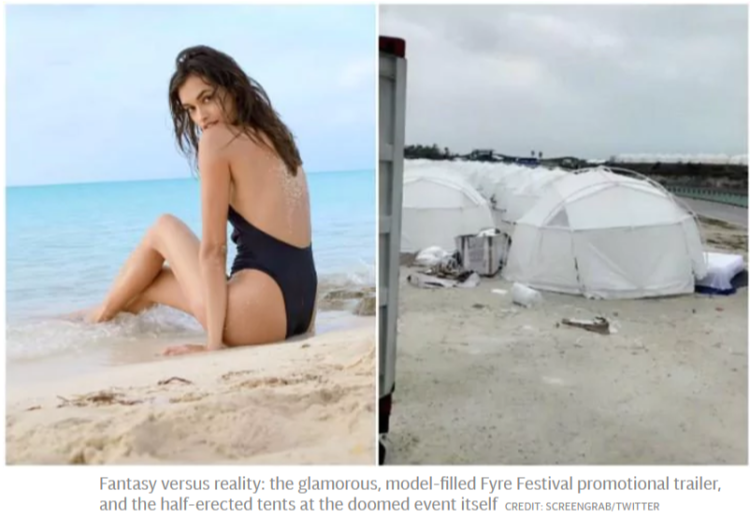 It was supposed to be the most glamorous event of the year, with all the selfie opportunities and flower-crowns a young, gym-bodied social media influencer could dream of. But Fyre Festival, an elite concert event on a deserted island in the Bahamas with tickets priced up to $12,000 has quickly turned into a terrifying B-movie, with flocks of Instagram models forced to seek shelter in an airport after arriving to discover a lack of food, violent locals, appalling accommodation and feral dogs roaming the grounds.

As a result, social media has exploded overnight with tales of Instagram-filtered terror and disappointment, with beautiful festival-goers arriving on the island to discover half-built tents, their luggage being thrown out of the back of a truck, muggers and thieves laying in wait to steal wallets from trust fund kids, unhelpful staff, and “gourmet cuisine” that turned out to be nothing but ham and cheese sandwiches.

The Bahamas are supposed to be sun and sand… romance and fun… not an episode of Survivor. The Bahama Ministry of Tourism is apologizing, but that doesn’t help much here. Fyre Festival is claiming they are refunding tickets in one place and saying sales are final in another. I wouldn’t count on getting your money back guys. Criminals are like that. Didn’t anyone bother to check all this out before going to the Bahamas? Talk about ripe for the picking.

Fyre Festival is the brain-child of tech entrepreneur Billy McFarland and Noughties rapper Ja Rule, designed as an exotic alternative to Coachella and promoted by a bevy of Instagram-friendly supermodels including Bella Hadid, Chanel Iman and Emily Ratajkowski. Lots of sexy women were used to advertise the event and it was an absolute disaster. Here’s a hint by someone who helps book things like this… check sources and check everything out in and around the event. It’s a hard lesson to learn, but not everything you see on Instagram is on the up and up. In John Hawkins’ New book, ‘101 Things All Young Adults Should Know’[3], he teaches in chapter 51 of the book, “Prepare in case it all goes wrong.” That certainly goes for something like this… always, always, always have a backup plan y’all. It could save your life.

Stuck at #fyrefestival[4] trying to leave for the last 8 hours. barley any food or water or security or electricity pic.twitter.com/jHPMnJw5gx[5]

The dinner that @fyrefestival[7] promised us was catered by Steven Starr is literally bread, cheese, and salad with dressing. #fyrefestival[4] pic.twitter.com/I8d0UlSNbd[8]

The "gourmet cuisine" this weekend was included in the ticket cost. We are being fed salads and ham and cheese sandwiches out of this tent pic.twitter.com/MRv7U0RiyM[15]

This is how Fyre Fest handles luggage. Just drop it out of a shipping container. At night. With no lights. #fyrefestival[4] pic.twitter.com/X5CdZRyJWo[17]